You are here: Home / Personal / topics / weblinks / Fiction in a Flash at SmokeLong

A piece of Flash Fiction from some of my talented colleagues debuted yesterday on SmokeLong, a weekly and quarterly Flash Fiction anthology.

Stephen Gardner’s The Booking of La Gianconda is a noir-ish snapshot from a 1936 jail-house that could easily fit into the fictional universe of Chicago. It’s accompanied by an illustration by Throwaway Horse founding partner Josh Levitas. 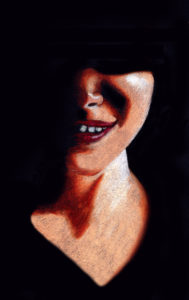 Illustration by Josh Levitas - visit smokelong.com for the full version and accompanying fiction.

Here’s about 5% of the the total tale:

“Hey, Glass Eye,” Walters called over to me as I fiddled with the Kodak slide film. At the name, I gritted my teeth hard enough to chip an incisor. Walters never let me forget the war wound. Like I said I’m a camera guy when I’m not riding a bucket and a mop, not even a cop.

(Visit SmokeLong for the full story!)

Flash Fiction doesn’t have a formal definition, but it’s about brevity and efficiency. SmokeLong’s limit is 1,000 words. While other outlets have much shorter word-count requirements, the common element is that good FF should consist of lithe, streamlined language that puts every word to good use.

I asked Josh if his accompanying flash illustration included any self-imposed restrictions: his finished picture was done in a single sitting with limited tweaks or digital post-production – all completed in less than an hour! It’s worth viewing the larger version at SmokeLong to see some detail that’s lost at the smaller size.

Kudos to Stephen and Josh for being featured, and for their evocative 1,000 words and single-hour image!