You are here: Home / Creative / my music / recording / smash in the studio

I haven’t recorded much new music for you since we moved into our house in 2010, which is downright odd, since now I have an entire music studio to produce in instead of an itty little 12’x12′ home office slash studio slash dressing room slash equipment shed.

The space is a plus and a minus. It’s a plus to not have all of my guitars piled up on top of each other in my walk in closet so I can never play any of them. The minus is, I’m only really working in the studio if I’m working in the studio. Do you catch my drift? It’s not like I’m trying to choose a shirt to wear to a party and taking a quick listen to a mix, or EQing vocals between blog posts. 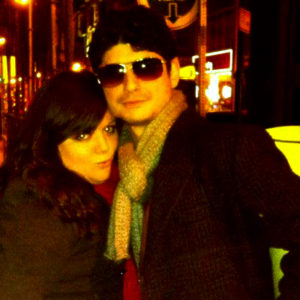 Just after agreeing to try being a band, as shot by @SuzyMags. Yes, I am wielding a neon green yoga mat, like the fucking rock star I am.

I spent yesterday locked in the studio, building an acoustic track from scratch for my new covers side project, Smash Fantastic.

I know, I know – another project? Am I ever going to make a freaking blog post, let alone focus on a band?

My excuse is that Smash Fantastic really plugged a hole in what I want to be doing. I love cover songs, and I love big-voiced woman. I tend to err in those directions for my own solo sets, but there’s only a pretty specific audience for my covering Kelly Clarkson and Lady Gaga.

Plus, let’s be honest, when am I every playing solo anymore?

Enter my friend and colleague Ashley. She has the pipes for those sorts of songs, but not an outlet for the sound. After a few months of messing around progressed to having a serious repertoire and a pair of performances, it seemed like time to have a demo.

Thus my day in the studio – first alone, and later with Ashley, covering one of our favorite songs line by line.

It felt really good. Not just the recording of it, but the knowing what I was doing, and the having the space to execute my vision without clearing a pile of clothes from where it was hanging over a microphone stand.

Now I just have to spend enough more time in the studio to turn the sum of 28 multi-track recordings from Arcati Crisis, Filmstar, and Smash Fantastic into actual, listenable songs.

I guess what I’m saying is: new music, coming soon!