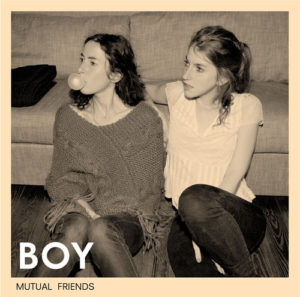 I spend so much time and attention putting things on my iPod that I hardly know what’s on it anymore.

Wait, that didn’t make any sense, did it?

There are distinct reasons that I am avowed in my neglect of streaming music services like Spotify. When I want all of the records Rolling Stone gave four or more stars to this year or everything from MetaCritic that scored an 80 or above, I am not just talking about the music a service managed to get the licensing rights to. I mean all of it, all the time – in cars and subway tunnels, on elevators and airplanes.

The downside of this Cookie Monster sort of approach to gobbling music is that I have no context. Songs aren’t showing up via recommendations or new playlists – they are just appearing en masse in my “Unheard Songs” list, which I’ve narrowed down to a very manageable 1995 at the moment.

Case and point: “Little Numbers” by BOY from their 2011 LP Mutual Friends. This came on via a random shuffle of my unheard songs the other day. I proceeded to play it 10 TIMES IN A ROW. It is so effing awesome. I can’t even.

That wicked simple piano line paired with a relentless handclap and snare hybrid. The slight Aimee Mann esque prickle to the vocal. Lyrics like “I rearrange parts of my living room – time is hard to kill since I met you.” And that’s all before the magnificent sing-songy refrain, “seven little numbers,” about the abject cruelty of those not-so-random digits that can make up the telephonic address of another human being. Somehow the whole feels indie but also somehow like a dance party without reeling out the slashing guitars and wheezing synths most indie rock uses to get to that point.

Apparently the song was in a Lufthansa Airlines commercial and was big in Japan (really), which tells me nothing about why I own it. It racked up nearly 10 million views on YouTube – although, if my listening habits are any indication, that may have come from 500,000 or less unique people mainlining the tune over and over.

Oh to get a look at those YouTube internal metrics.

Meanwhile, the LP Mutual Friends was out two years ago today and did in fact get an 80 on MetaCritic (from five reviews that don’t actually average 80), which I suppose explains how it wound up on my iPod, but Rolling Stone just shared the MP3 this year and the only review I can locate is 3.5 stars and in German.

So how did it wind up on my iPod? No idea. But I’m keeping it – not only because it is an amazingly little construct of a song, but because it is proof positive that my widely cast net of musical interest hauls in some prize catches amongst all the flotsam.