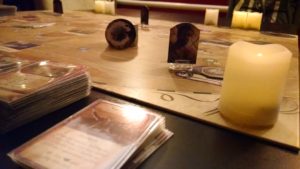 It’s Friday night, and while we have to get up tomorrow at the same time we do every day because that’s how toddlers work, we’re still throwing caution to the wind and starting a game of Eldritch Horror after 9:30, which guarantees we’ll be up past midnight.

A few months ago E and I vowed to take one “non-screen night” a week where after EV was asleep we’d put down our laptops and turn off our Netflix binging to do something together. Except, the first few weeks were… well, a bit awkward. We don’t really like crafting or cooking together. Playing music could wake EV. I proposed a book club, but we were unable to come to agreement on what to read.

The answer was obvious: games. If we had more two-player games, we could turn no-screen into a game night. This especially appealed to me as an only-child with a mom who was mostly into very literal games like Trivial Pursuit and Monopoly. There’s a whole world of fantastical board games I’ve never had the chance to play! As I was beginning to press the game option with E, one of my favorite comic authors – Kieron Gillen – posted an Instagram shot of him playing Cyclades. My interest was piqued, and after researching it on BoardGameGeek I decided it was up my alley.

BoardGameGeek is the sort of website I can disappear into, never to return – combining thoughtful reviews with thorough data and user forums. Cyclades was every bit as beautiful and ingenious as I could have hoped, like a weird blend of Risk, Catan, and Jason & The Argonauts – and, I set out to find more games I might like just as much. I immediately purchased its exceptional expansions, Hades and Titans. Then we had a board game gold-rush weekend where we acquired Jaipur (2p, genius), The Castles of Mad King Ludwig (awful and fiddly), Kemet (brutal and satisfying), and Eldritch Horror.

I had read the warnings about the Cthulhu-infused Eldritch Horror. Complicated, involved to set-up, sometimes crushingly difficult – it sounded like a game I might like, but I wasn’t so sure about E.

I needn’t have worried. E could not resist a globe-spanning pre-WWII story of sealing away Lovecraftian horrors before they could destroy the world – especially in the form of a cooperative game full of powerful female characters. It took her watching just one game of my solo play to volunteer.

Fast forward a month: we have all three expansions, plus many accoutrement like special dice, card sleeves, and box organizers, and we are just getting back to it after taking a break after a week-solid sprint against the Ancient Ones. Tonight we’re facing Syzygy. Wish us luck! Perhaps if we survive I’ll come back with a more proper review.