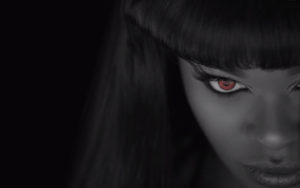 Stop whatever you are doing and fall in love Azaelia Banks.

(I was supposed to be loving her in person in a few days during her first big national tour along with K. Michelle, but it was cancelled and now I am bereft, so the next best thing is sharing my love with the rest of you.)

If you’ve heard of Ms. Banks, I can 98 and 3/4 percent guarantee that it’s for one of two reasons. First, it could be for her international smash debut single “212.” (Yeah, it was awesome.) Second, it could be her ongoing social media feuds that critics use to paint her as the crazy foil to more media darling rappers like Nikki Minaj or Iggy Azalea.

My bold proposal is that Banks’s music ability and virtuosic genius far outstrips any perception of her being a loudmouth on social media, and that in fact her loudmouthedness is really just the combination of her relative youth and intellect manifesting as rage at all the injustices small and large in the world around us. And, not for nothing, but we accept young loudmouthed men and white people all the time and merrily consume their music, but as a woman of color we’re expected to dissect every single thing she says.

Azaelia Banks does not need me to say these things. I don’t even want to talk about them. I am saying them for you, because if Bank’s media image as a Crazy Girl or Big Bad Wofl are getting the way of you listening to her music you are losing out. I fucking love just about every piece of music Azaelia Banks releases.

Case and point: “Chasing Time” from my favorite album of 2014, her debut, Broke With Expensive Taste.

This song. This fucking song. I’m not even sure where to begin.

Let’s start with her voice. The song starts with a husky contralto rap, then shifts up to that nasally standard female R&B voice, then through to the chorus it gets bigger and clearer until we we’re getting fully, throaty stacks of harmony unlike anything today’s crop of rap crossover stars are delivering. You can hear the influences in there, but you can also hear how Banks’ voice doesn’t fit simply into a box. There’s no straight-line to a single prior act.

(Spoiler alert: this is not a fluke. That amazing dynamic range is all over her album.)

Next, the music. Despite being born a few weeks after “Vogue” hit the charts in 1991, Banks has a sound that’s deeply rooted in the 90s house music of the period that Madonna summed up in her major hit. Yet, it’s not the only noise she knows how to make – “212” is a much more straight-forward beats-driven rap song. In fact, Banks even issued an EP titled 1991 that was bathed in this sound. Here its represented by sustain passing synth chords and rapidly changing clanging chords, but also a weirdly alien burbling drum track.

(Spoiler alert: this is a star whose brain is wired for ingenious arrangments. I’ve seen interviews where she describes singing all of the parts of an arrangement to her producers, a la Michael Jackson.)

Finally, the lyrics. While the chorus has a hook-and-repeat vibe, the track on the whole is a lot deeper than that. Here’s how it begins.

I want somebody who can take it apart, stitch me back together make me into who I wanna be.
But all you ever do is sit in the dark. Dealing with the Devil, you ain’t never ever gonna be mine.

Cause I’m born to dance in the moonlight
I feel like spending my nights alone
I try to give you a little more space to grow
White lies, I don’t wanna be around anymore
I’m through giving, I’ve got to go….

These are all reasons I am in love with Azaelia Banks, and with “Chasing Time” in specific. She is a rare pop auteur putting the pieces together in new and interesting ways, made all the more interesting by the fact she is an outstanding rapper. Good rappers who are good singers are few and far between, and ones with ideas this interesting (and, frankly, images so seldom about sexual provocation) are far fewer.

I want you to give her a listen, and don’t take her advice from the final lines of this song.

And you’re like, “Girl, how you do that?”
My attitude is bitchy but you already knew that…
And since we can’t get along
I think we should both move on