You are here: Home / Personal / topics / memories / like a carnival ride, I kept swinging from side the side

Last night, Mother of Krisis and I brought EV to the Wildwood Boardwalk for her first encounter with funnel cake, seagulls, and carnival rides.

(I think EV has already encountered white trash within the actual boundaries of Philadelphia. HEY-OH.)

(I kid, I kid. I actually have a deep, abiding love of the Wildwood Boardwalk as the sole interesting thing about being dragged to the beach multiple times each summer. It offers many bounties, like Curly’s Fries, Salt Water Taffy, and Lime Rickey, and it’s where I first encountered the six-player X-Men arcade game which birthed my obsession with Dazzler.) 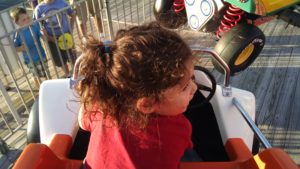 Our first excursion was a set of Jeep-like buggies which rode up and down over invisible hills, encountering some bumps along the way. Since it was EV’s first ride and because I did not want to be the parent yelling soothing words at a crying child trapped on a ride for two more minutes, I opted to ride along with her in the comedically small car. EV sat in the driver’s seat, with me crouched awkwardly behind her.

(Mother refers to rides vaguely as “the attractions” in the manner of a jaded carny.)

I was immediately happy with my choice to accompany EV, because before the ride even began we were attacked by half a dozen seagulls. We hadn’t even had the funnel cake yet, but maybe she had one little crumb in her hair from lunch or something. Those fuckers are ruthless. My Tiger Father instincts kicked in and I formed a fleshy suit of gull armor around EV’s body, slapping birds away with the flats of my palms.

Actually, the seagull attack was a good introduction to the boardwalk. Not only did EV totally understand our need to eat funnel cake covertly later in the evening, but I think the gulls were scarier than any of the rides. After that, the the buggy bumps were only mildly alarming – possibly just because they were invisible.

The first time around, EV looked back at me, wincing. Not a good sign. “That’s the bumps!” I exclaimed, joyfully. “You have to get ready to steer over them.” The second time there was no wincing, but still an expression of great concern.

The third time there was maniacal laughter and an expression of pure joy. She would ride the buggies several more times – without me along in the backseat.

This morning we cast about for something to do that was not the beach, because my anxiety builds exponentially with each grain of sand stuck to my person. We settled on a tandem surrey ride on the boardwalk.

I enjoy the boardwalk by day – when I was trapped at the shore against my will as a kid I would walk its full, mostly-empty length and back while early risers hit the beach (a preview of my adult jogging on the Vegas strip while the prior night’s revelers were still passed out on benches).

The problem with this plan was the bit about working in tandem. Though Mother of Krisis is still convalescing from surgery, she thought she’d be able to occasionally contribute to the pedaling of said surrey. Perhaps she could have. The issue we encountered was that her feet could not even reach the pedals.

That meant I would be the sole pedaler for our 90-minute journey.

Let’s do some back of napkin math, shall we? A bit of web sleuthing reveals the surrey is 265 pounds, shipped. I’ll be generous and assume 10% of that weight is packaging. Mother of Krisis, EV, and I combined weigh 356 pounds. I carry a backpack that is another 15 pounds, at least, owing in part to the 100oz Camelbak full of water inside (for which I was very thankful).

That meant I spent 90 minutes locomoting over 600 pounds of Krisis Family Vacation up and down the boardwalk with only the power of my thick Italian thighs, all while small children on bikes and surreys powered by more than one person bobbed and weaved around us.

I wish I could say that writing this blog constituted the sum total of my subsequent physical activity for the day, but afterwards I swam laps while EV splashed around with her grandpop.

See: I really don’t vacation well. The only way to push through my mounting anxiety is to treat each day like I am on some sort of reality TV fitness challenge.