You are here: Home / Personal / topics / thoughts / I (Kirsten Dunst movie) do not care about (Katy Perry song title) 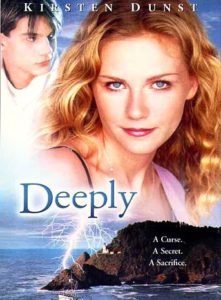 Like a David Foster Wallace novel, this is only going to make sense if you read the footnotes.

There are some things in the world that I deeply, deeply1,do not give any shits about but I am begrudgingly willing to experience through the eyes of a toddler. Holiday fireworks are one of those things, which makes it cosmically Alanis Ironic that I watched them without EV.

Fireworks sparkle, which is plus, but they are loud and incredibly pointless, which is a minus. I’m all about enjoying excerpts of them from a vantage point that is far away from where they are exploding (but not from the comfort of my own home, because that means that they are too close to home). Like, maybe I would enjoy them from a roof deck party with some delicious catering. In the fall. Wearing a jacket.

Yet, there we were, past EV’s bedtime in a crowd of people who were waiting to watch fireworks. Well, really, there were E and EV. I was still parking the car, largely because we were told to do so by two bored-looking police officers.

“But, there’s no signs saying we can’t park here,” E retorted, when they told us we weren’t allowed to park on the side of the street we just parked on, alongside several other cars and absolutely zero signage about not parking there.

“Yeah,” one of them replied, “there ought to be some signs. Last year we didn’t have signs, and it was just a mess out here with all the fire trucks and ambulances on the street. There really ought to be signs.”

As a result of that total non-answer, I was parking the car in part of downtown Landsdowne I had never before seen while E and EV walked to the local high school’s field to watch the fireworks show for a suggested donation, which is another aspect of fireworks you do not have to deal with when watching them from afar.4

I parked my car Bowie-knows-where at the asterisk intersection of three different streets. Luckily, I could still see the top of the high school and so, after reciting a mnemonic for the cross streets to myself5, I began to thread my way through a series of one-way side streets toward the school, following the ever-growing trickle of people funneling in from other adjacent streets.

As I turned a final corner to reach the side of the field, I noticed that a section of fence was broken open. It curled back on itself. No one was anywhere nearby. I could just duck under the fence with my water bottle and my laptop and avoid paying to watch the fireworks I planned to studiously ignore while writing a blog post on said laptop and stealing sideways glances at EV.

I considered it for only a moment, because I generally do not break any laws or ordinances regardless of if there will be consequences (thus the re-parking of car despite lack of enforceable signs). Anyway, the field wasn’t especially full, so it felt wrong to avoid the cover charge. The crowd was sparse enough that some kids were turning long peals of cartwheels down the middle of it. I texted E with one thumb: Where AR U?

She texted back: Middle bleachers.

Funny that; there were no bleachers on the field.

I paced back and forth down its length, trying to imagine if she would refer to a small copse of folding chairs as “bleachers” and also wondering where you paid to enter before it occurred to me that the high school must have two fields6. This field, I realized as the fireworks began exploding overhead, constituted the cheap seats – you didn’t have to pay to sit here.

I half-jogged off the field, adjusted my speed based on the amount of perspiring I was already doing, and ambled around the school as the glittering opening salvo exploded over my head to the strains of a John Williams march. As I turned the northeast corner of the building I discovered the throngs of people that the parking situation clearly indicated were in attendance. I picked through the crowd until I reached a thick knot of folks standing between me and the the gate to the second field. They could all see and hear the fireworks perfectly well; some of them were sitting on blankets in the middle of the street. Beyond them, there was a sole man in a “STAFF” shirt, ostensibly acting as a ticket-seller, ticket-taker, and bouncer all rolled up into one. Past him was a field of even more people, with a marginally better view of the fireworks than the knot I was tied up in.

I was reaching for my wallet to pay just as another salvo launched. The fireworks were so loud. My head was already thrumming from the repeated booms. I think they were nearly as loud as my drummer Zina, and I won’t go anywhere near her without ear plugs or in-ear monitors. I took another look past the seller/taker/bouncer at the field. It was teeming with people and it was closer to where the fireworks were exploding. I don’t like either of those things. Yet, somewhere in the teeming mass was my wife and child, the latter of whom was either gaping in wonder at the man-made marvel of fireworks or sobbing inconsolably about how loud they were7.

I did some mental calculations. We were at least two Williams movements into the show. It would take me at least another three minutes to pick my way across the field in the darkness to the middle bleachers. How long could a fireworks show be? 10 minutes? 12? I wanted to experience EV experiencing the fireworks, but it seemed like I’d only make it in for a minute of them, tops. I texted E: Staying outside fence at this point.

There was a terrifically gnarled old tree across from the entrance to the field. I sat on its grasping roots at the fireworks continued overhead, now to the strains of “The Raiders March” from Indiana Jones. The march came and went. Fireworks were still exploding. I pressed a pinky into my ear and texted E: Kind of long, no? How is she holding up.

No answer. We were onto some other Williams now, but not Star Wars, although I cannot imagine why not. Certainly it’s not any more of a fireworks choreography cliche than Indiana Jones?

Long story moderately long, the fireworks went on for 30 minutes all throughout which I kept thinking, “surely that must be the finale, it cannot possibly get louder than that,” and then for another rogue minute after the music stopped that was either a dangerous misfire or an encore. Despite all the throngs of people, it wasn’t hard to spot E and EV afterwards to lead them back through the series of sides streets back to the car.

“Did you like the fireworks?” I asked EV, who looked blessedly un-tear-stained.

“THERE WERE EXTRA!” she answered. “EXTRA FIREWORKS!”

“YES, EXTRA FIREWORKS AT THE END AND I ATE A LOT OF SNACKS AND THERE WAS A MAN HE MADE A ‘V’ WITH THE LIGHT UP SWORDS LIKE THE ‘V’ IN MY NAME, ‘EV’!”

“Do you think she’s yelling because she was deafened?” I asked E.

I smiled. I might have missed the fireworks, but I definitely did not miss her reaction.8

1. One time E and I bought the Kirsten Dunst movie Deeply for $5 at a grocery store and it was every bit as bad as that suggests and every time we refer to it (which is with surprising frequency) we say it in this lusty, throaty voice, like “deeeEEEEEEply,” and that is the voice with which you should read the italicized word above.

2. I’m sorry, I tried to make this into a green eggs and ham3 joke, but the meter never gelled.

3. I have yet to read Green Eggs and Ham to EV because all of the eggs we eat are green (either with spinach or pesto) and I do not want to put her off of them.

4. E has informed me that it is common to charge for premium seating for fireworks displays in the suburbs and I was like “For real for real?” Philly is so flat and the buildings are so low south of Chestnut that you can more or less see waterfront or sports complex fireworks from any rooftop and most back windows. Come to think of it, one of the big differences between city life and suburb life is that I no longer have a back window to climb out of onto a roof BUT ALSO that suspected burglars cannot flee across my roof either.

5. “Favorite pizza in college, a small and typically shortrun paperback booklet yet not a booklet but a man, marriage of those two concepts.” Or, Powelton, Chapman, and Union avenues.

6. Consider that I attended a city high school where the only two outdoor spaces were a caged-in roof and a tiny parking lot that you had to circle nine times to run a mile, vaulting trash bags along the way.

7. She is not much of a cryer and she totally hangs at rehearsal with Zina (while wearing ear protection, of course), but she is terrified of loud noises she can’t really get away from, like hand dryers in small public restrooms. A few weeks ago we were in a stall toilet in a tiny bathroom at the zoo when a gaggle of kids decided to play with the hand dryer, and that was maybe my second worst five minutes of parenting so far since I’ve been parenting full time (and the first worst was on that day, too).

8. Just a reminder that you don’t have to read every italicized work on my blog like”deeeEEEEEEply.” It was just that one time. I don’t want to leave you with the wrong idea. That’s not what I mean every time I use italics.