You are here: Home / consume / games / Pokémon Go through the eyes of a newbie trainer

I am lying in the middle of my living room floor, likely creating a puddle of sweat beneath my back, and it’s all because of Pokémon Go.

Let’s back up a few days.

Pokémon Go is an augmented reality mobile game that was released last Wednesday across the United States by Niantic Labs (formerly of Google; now an independent company). In it, you run around in the real world while throwing virtual digital balls imaginary fantastical creatures. Oh, and apparently you go to church. A lot.

Okay, okay, I know a little more about Pokémon Go than that, but only through the past few hours of firsthand experience. Honestly, I only understand what Pokémon even are in the vaguest of terms. I was just aging out of spending my money and time on stuff like games, cards, and comics by the middle of the 90s, so I wasn’t even aware of the existence of Pokemon until I met E’s little brother in 2002.

Even then, I only understand it as an execution of several geeky archetypes – characters who collect things, summoning of creatures, opposing elements in a fighting game, and evolving creatures. I have no concept of how any of the games play or the story behind them.

As reports from seemingly every single person I have ever met about their Pokémon Go play experiences began to crop up over the weekend, a familiar urge began to bubble up inside my gut. Yes, it was the special brand of agita created by OCD Godzilla. There were people out there playing a game about collecting things, and if I didn’t start playing it right now I might miss content and experiences that would never be available again.

On the other hand, there is no part of Pokémon Go that particularly interests me – not the IP, nor the augmented reality. Plus, I’m never aimlessly walking around other than with EV, who I categorically prevent from fussing with screens, digital games, and IP other than Marvel’s. (Sorry, I’m weak.)

On the other other hand, “FEAR OF MISSING OUT,” roared OCD Godzilla from his position just below my spleen. My friends were not only catching a bunch of Pokémon, they were exploring their neighborhoods and meeting new people! It was a collecting game and a way to get around social anxiety!

After idly Googling some playing guides after rehearsal, I learned the sort of exclusivity detail that is frequently the death of my free time and disposable income: you can avoid the typically prescribed trio of starter creatures to grab Pikachu instead. I’m not sure what Pikachu is (apparently a sort of electric mouse?), but I know he’s was the first and most-enduring mascot of the franchise due to E’s brother’s many stuffed iterations of him.

I decided I would install the game and walk around with it just long enough to grab that little yellow bugger so at least I could be informed while everyone talked to me about it. And, if starter Pikachu was ever later removed, I could remain satisfied I hadn’t missed out on anything.

(DO YOU HEAR THAT, OCD GODZILLA? I WON’T BE MISSING OUT ON ANYTHING.) 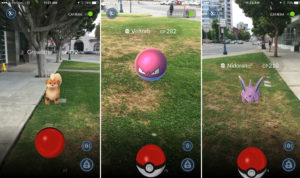 Screenshots from The Verge’s preview article.

I installed the game, went on an evening walk with EV. After ignoring the normal starter monsters three times, a vibration of my phone announced the proximity of Pikachu. I tapped his sprite on the map and collected Pikachu by tossing a virtual ball at his augmented reality head.

I admit, the augmented reality shock of seeing him sitting in the middle of the street via my camera was thrilling. The gameplay of clumsily lobbing the virtual ball at his head wasn’t so exciting.  After capturing him, I left my phone on, but we apparently didn’t encounter any other beasts – nor did we locate the throngs of humanity said to be chasing and battling all across America.

I guess my part of DelCo is a Pokémon dead zone.

We finished our walk and I put EV to bed. When E got home from rehearsal, I opened up the app to show her what everyone has been talking about.

“And, there’s this sort of radar for nearby… what the fuck is that?”

In my little radar bay there were a series of tiny Pokémon silhouettes and one massive one. Like, it could have been the Pokémon of OCD Godzilla, its silhouette was so fearsome. It was purportedly only “one footprint” away (as I later learned, less than 250 feet).

I made a split second decision that I would head out for a nighttime jog that doubled as a second Pokémon demo. After all, one of my stay-at-home-parent goals was to get back to my pre-baby level of weight and fitness, and after an initial quick drop of start-up snacks weight I’ve been on a plateau for two months now. I changed into some neglected gym clothes and E outfitted me with blinkers on my speakers. I don’t have any headphones suitable for running, so I plugged in my in-ear stage monitors – they’re used to plenty of sweat and jumping around.

Out I went. I never did find that massive beast supposedly just outside our house despite nearly resorting to beating the bushes to get him to emerge (score one for augmented reality). Frustrated but still eager to see the game in action, I wound up jogging for an hour trying to locate other critters, which has never happened before in my life. (The jogging, not the locating critters.)

The actual game experience was rather awful for me, and I can’t tell if that’s the game’s fault or just my own shortcomings as a Pokémon neophyte. I had to run back into the house after the first 15 minutes to Google how to find Pokemon. I was too low-level to use our local gym (a church, but not one someone was living in), but when I jogged to several PokeStops and toggled their icons nothing seemed to happen. I Googled extensively with my phone’s precious battery, but discovered nothing. (You have to spin them like coins to access them, which is not at all suggested by their UI.)

I ran through several serpentine miles through a residential neighborhood before I even encountered a Pokémon, although after that I discovered a steady trickle of them over the course of the next hour. I learned that Pokémon Go is like gamified interval training – you run until a Pokémon is only two footprints away, and then you meander aimlessly trying to find it, seeming as though you are on drugs or casing people’s house for a robbery or both until you seem to be getting closer.

(I felt awkward while trying to zero in on my prey, which wasn’t entirely the fault of the buggy radar or the darkness. Even while being careful not to cross any property lines, I could easily see how sketchy my behavior would have looked to the eye of an observer. I can entirely understand why Omari Akil called the game “a death sentence if you are a black man.”)

Each creature come with a bevy of stats and bonuses for which the game offers no explanation aside from CP being their power level. I’ve read that there’s a method for trading in duplicated monsters for candy, but the game never mentioned that when I got my first duplicate. Also, the radar proved close to useless, throwing up many false positives that never got closer despite careful triangulation.

(If they just reskinned the darn thing with Marvel superheroes I could probably qualify for the next Olympics with the amount of running I’d do to snag a rare Kitty Pryde.)

On the whole, I’m not quite sure what the point is, other than collecting them all – I get that there is training and fighting, but I’m not sure why I should care or what kind of time or effort that will require.

However, note that I jogged for several miles just to find one of these damn things. That’s more miles than I’ve jogged this entire year so far. I am completed covered in sweat and I feel tired, sore, and awesome. I don’t care a damned bit about which creatures I caught, but I’m looking forward to doing it again tomorrow night if it means another cool, nighttime jog and getting back to my pre-baby, pre-start-up shape.

It’s that quality that makes it such a killer app: so far, it’s not prescriptive. Sure, there are people competing for control of our local church (which is weird to type), but I can simply keep going on nightly jogs to catch Pokémon while other people choose to c0-play with their kids while avoiding the fighting parts. Pokémon Go already exceeding Tinder’s install base and rivaling Twitters daily active users. Those numbers are only going to go up, as right now we’re still in the group of earliest adopters and those who have heard firsthand word of mouth.

If both the massive week-one success and my willingness to give the game a try signal anything, it’s that there is a huge market for augmented reality gamification. Foursquare had the right idea several years ago, but it was too exclusive to a set of Twitterati who were constantly broadcasting their social actions; Pokémon go makes no such demands. Not every successive augmented reality game will enjoy this level of total media dominance, but I’m certain we’re due for a lot more of them in 2017.