You are here: Home / Personal / topics / memories / two zoos in two days (and one terrifying capybara)

E’s sister Jenny has stayed with us many times since we’ve lived in this house and they’ve all been pretty boring.

This is completely paradoxical, as Jenny is a professional museumologist (I should probably ask her what the real word is) and world traveller who loves nothing more than a zoo – or, even a safari (the non-violent kind). Both time I’ve visited her in California have been filled with an assortment of jogging, yoga, movies, dinners, and museums. Yet, E and I are usually exhausted from work and willing to be the ultimate homebodies, so having Jenny stay with us in Philly tends to turn into a lot of lying on the floor and watching Netflix all day. I’m pretty sure we’ve literally done nothing with her on any occasion of her staying here other than leave the house to get food.

Of course, now there is an EV in the equation – we can’t lie on the floor and watch Netflix all day because (a) she isn’t permitted to watch TV and (b) she would spend the entire time walking all over us. Also, (c), you have to feed her something other than tea and cereal. Plus, sitting around the house all day is a little less attractive when you have every day off from work because you quit your job to hang out with a toddler.

Thus, for this Jenny-cation I swore that we’d do some adventuring together with EV. I didn’t intend for that to be entirely crammed into a single 48hr period, but this week’s excessive heat left us with a small window into which we had to cram all of our outdoor action. 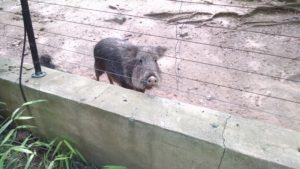 We wound up doing two zoos in two days, and despite hitting various zoos over a half a dozen times in my 10 weeks of toddler concierge service, these past two days were some of the most fun. Jenny provided some much-appreciated tag-teaming, knows a seemingly endless amount of animal facts, facilitated thoughtful engagement with the elements of instructional design that I normally ignore, and even figured out that we got a massive discount at one zoo due to being members of the other one.

Due to Jenny’s zoo obsession and world-traveling habits, it is really hard to find an animal she has never seen before or an animal experience that is completely unique for her, so I pride myself that we were able to tick both boxes yesterday at the Elmwood Park Zoo.

First, there is the peccary, also known as “the skunk pig.” They are the weirdest thing. It’s a slender pig on high, spindly legs with a coat of bristly fur that is nearly reminiscent of a porcupine. When I was first researching Elmwood Park with Mother of Krisis for a visit last month, I was sure that the peccary’s entry on their site was an overripe April Fool’s joke – surely this oddball thing wasn’t an actual animal!

Not only is it actual, but Jenny had never seen one before. They’re honestly not all that exciting to look at, but their slightly ominous, Lord of the Flies dead-eye gaze in photos doesn’t really portray how ridiculous they look in person as they shuffle around to dig in the dirt with their snouts. 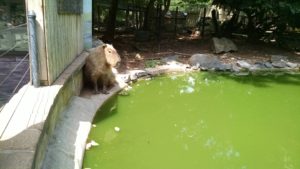 In addition to introducing Jenny to peccaries, we also got closer to a capybara than either of us had even been before. Due to it carefully balancing itself on the edge of its tiny, artificial lakeland home, we were barely an arm’s length away from the creature, and I return to inform you that as the largest rodents in the world capybaras are fucking terrifying.

Like, sure, from afar when they are napping (which is pretty much ALWAYS in my experience) they look like a cute, pillow-sized guinea pig hamster sort of thing that you could snuggle at night, but when you are up close you realize they are a rodent that half as big as you and as solid as a bulldog and they do all of those twitchy little rodent things you’ve seen a hamster do except at about ten times the scale.

That little nose-wrinkle that is so adorable when held in the palm of your hand? When you see it magnified 10x by something that could probably chomp clean through your arm it activates base fight-or-flight instincts in your subconscious lizard brain. They are downright disturbing. It occupies a sort of uncanny valley of unreality that, combined with my terror, made it a struggle to keep my eyes affixed on it for more than a few seconds at a time.

Jenny is with us for a few more days and I’m sure she’ll create many more memories with EV, but for me it will be hard to top that wild kingdom double-whammy on this trip – plus, it gives me something to try to top for the next time she’s in town, and we all know there’s no one I am more competitive with than myself.