Today the leading story on the political internet is that Hillary Clinton coughed yesterday, closed followed by Trump’s children being a cadre of evil Kryptonians escaped from the Phantom Zone.

Hold on, I am just going to fashion my framed Journalism diploma into a deadly throwing star that I can use as a weapon during the impending end times. I’ll be right back.

Let’s start with Hillary. It’s not that she coughed once. She coughed several times. It was a coughing fit, actually, enough so that she excused herself from the presence of reporters.

On one hand, it’s a lightweight story that humanizes a candidate. We’ve all had that moment of coughing, sneezing, or eye-itching in the middle of a meeting. Hey, it happens to Clinton, too! She’s not a robot. On the other hand, it’s part of a continuing narrative about Clinton’s declining health and unfitness for the presidency. 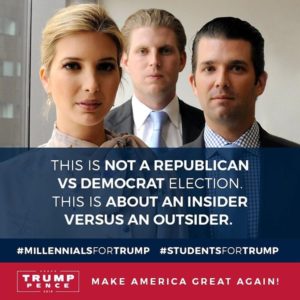 None of that is the actual story. We’ll get back to that in a moment.

The big politic meme of the week has been a Trump outreach campaign targeted at millennials. In the outreach, three of Trump’s children pose stonefaced in a either a terrible photo or a terrible photoshop job above the caption “This is not a Republican vs Democrat election. This is about an insider versus an outsider.”

There is so much to unpack about that photo and caption, and why this outreach is warranted in the first place. However, do you know what people were mostly tweeting about? How much the junior Trumps resembled a host of cinematic villains – from Children of the Corn to Slytherins to the Kryptonians who escaped the Phantom Zone in Superman 2.

The reality is that Donald Trump is barely beating the collective third party candidates among likely voters of the millennial generation. An August Quinnipiac University poll had him at 24% to Clinton’s 48% in a four-way race against Johnson and Stein (here’s the raw poll results). Yes, that’s right, Clinton is beating him by a 100%.

I have not seen that fact tweeted or commented a single time on all the villainous memes. I also haven’t seen discussion of the fact that the youth vote is purely a turnout game, since this huge swath of voters rarely hits the 50% mark in participation. What other Get Out The Vote efforts is Trump’s campaign undertaking with this population? Should he even engage, given his low percentage of support?

Nor have I seen a mention of the “why” behind Trump’s low numbers. Yes, conservative candidates do better with older voters, but Romney did more than 10% better amount younger voters in 2012 than this Trump projection. Romney was a stuffed shirt generally unknown to voters outside the Northeast up against a hip, relatively young incumbent. Shouldn’t Trump be doing at least as well as a media star with high visibility across the entire lives of these likely voters? Which of Trump’s positions are alienating this group the most? Could it have something to do with the higher percentage of non-whites in this newest voting generation, considering Trump scores anywhere from 20% to 0% percent of likely votes with different minority groups?

I don’t know the answers to any of those questions, but five minutes of research got me this far. People spent considerably longer searching for just the right villainous photo for their memes.

Also… “outsider”? Outsider to what, exactly? Trump has never held political office, but he’s also a lifelong second-generation businessman who is ultra-rich and has had his own TV show. Sure, he’s an outsider to Washington, but he’s still part of a permanently entrenched 1% – his children only moreso!

Which brings me back to Hillary Clinton’s cough. True, she had quite a coughing fit at a campaign stop earlier this week. However, yesterday’s story carries a very specific piece of information with it – reporters observed her coughing fit during impromptu remarks on her campaign plane.

This is not newsworthy because of the cough. This is newsworthy because Clinton was appearing within arm’s reach of reporters. Clinton’s hasn’t given a proper press conference with an open call for questions for nearly nine months. In fact, the press’s presence was due to Clinton rolling out a new campaign airplane yesterday with room for them to ride along.

While it’s not unusual for campaigns to kick into high gear after Labor Day, there’s a lot more to examine there. Why had the press suddenly been granted access? Why had Clinton avoided them for so long? Would that access continue daily on the plane? On the topic of her health, have the health records she has released been suitably detailed? What about Trump’s, given the admission that his doctor wrote his letter of health recommendation in five minutes?

Who the heck knows, because the majority of stories lead with the cough.

@NBCPolitics Are you kidding me?! You call yourselves journalists? There are literally >100 more interesting election things to report today

If you were wondering: Yes, I did endure a number of attacks from conservatives in response to that tweet, each about how I was a liberal something or another giving a pass to I don’t even know because I stopped listening.

Every time I am tempted to think uncharitably about the lack of inquisitiveness of the American people during this election season, I find myself instead marveling at the painfully low quality of mass market journalism being offered to said constituency.

If no article about Trump’s villainous kids mentions millennial poll numbers its easy to turn it into a game of mockery, which is vile no matter which side of the aisle it occur on. And, if all of the articles about Clinton’s impromptu press conference lead with her cough, can you blame the public for approaching this election from an issues-free stance, preferring to apply false dichotomies like “man versus woman” or “insider versus outsider”?

Journalists are increasingly serving up anything that gets them a click – including memes and sensationalist non-issue headlines. Can we blame them for writing about inane topics when those are the ones that draw in the eyeballs that pay their salaries?

This is an abusive chicken and egg relationship, and it doesn’t stop until you make your own choice to short circuit it. Stop sharing the memes. Stop clicking the sensational headlines. When it comes down to it, social media has made us all miniature journalists, aggregating our own publication’s worth of content in our various feeds.

If this election is so important and the choice between these candidates so stark, then maybe you can be the first journalist who elects to reduce the noise and amplify the signal.

Previous Post: « New Collecting Guide: Marvel’s Shang Chi, Master of Kung Fu
Next Post: What is “Internet Scarce” and why should you care? »