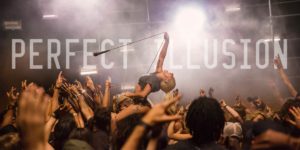 If you were returning to the mainstream after tepidly-received synthesizer-based record but also two years of acclaim as a jazz singer and actress, what would you want your comeback single to sound like?

First, no song will ever be as good as her sophomore comeback stunner “Bad Romance,” but there are other pitfalls. Too synth-y and it’s labeled as more of the same, too dance-y and it’s a regression. Too many repeated words and self-references and you’ve descended into schtick. If the vocals aren’t off the charts you get pegged as an also-ran who faked her way through the jazz period.

What’s a global icon to do? I’m not sure, but I’m also not sure you could do much better than “Perfect Illusion,” the sizzling single Gaga dropped at midnight on Thursday. It might not be a perfect pop song, but it’s a smartly-constructed comeback.

Let’s review all the parts, shall we?

First, note that this is a rock song. That’s signaled clearly by the sizzling i-VII-VI electric guitar riff that underpins the entire song and the pulsing fuzz bass that drives the verses. It’s also got a hint of disco which is unleashed in the outro – listen for the guitar stabs coming out of the key change chorus and a brief sample of a sawing string section.

With Katy Perry taking over for Lady Gaga in the world of synthetic pop and even Taylor Swift stealing Gaga’s tangle of minor key synths on songs like “Style,” Gaga couldn’t go back to the well. Dance-influenced rock is a radio mainstay now thanks to songs like “Shut Up and Dance” and this year’s breakout by 21 Pilots. It’s also Lady Gaga’s ancestral home where love of Bowie and Queen merge with 80s influences like Whitney Houston and Madonna.

A collaboration with Mick Ronson (of Amy Winehouse and “Uptown Funk” fame) and Kevin Parker (from Tame Impala) added tangible texture that Gaga usually reserves for ballads like “Speechless” and “Dope” without relying on an acoustic piano. That was necessary coming off of the critical acclaim from her past few years. Her chance to cross over to new fans or just more mature old ones is to present a more unvarnished version of herself and her sound. “Perfect Illusion” hits the mark, complete with a slight scream-y edge to the highest vocals.

When she was last on pop culture center stage, it was unquestioned that Gaga was a vocalist above all competitors save for Beyonce. She retakes that crown here, with all of her idiosyncrasies intact. Show-off-y key change aside (it tops out on Eb5 in chest), listen to how she carefully over-pronounces “i-loo-shun” every time. It’s a minor reference to her kooky heritage, repping for the obsessive theatre kids who keep their vowel sounds in check.

Another thing that’s intact? Gaga’s dead simple songwriting. If you’ve heard some complaints that this is just two verses, a brief brief, and an endless refrain, they’re from people who forgot “Love Game,” “Poker Face,” “Born This Way,” “Applause,” and all the other songs that fit this cookie-cutter structure. Gaga doesn’t waste a lot of words on verses.

All of that analysis skirts the issue of if the song is any good. I’d say it’s just “okay,” but so are many of Lady Gaga’s singles until they’ve been drilled into your brain. “Perfect Illusion” is no more or less basic than her debut on “Just Dance,” which features nary a memorable vocal hook and relies on repeated chords to be memorable.

Similar to “Just Dance,” “Perfect Illusion’ has verses that rely on simple two-note phrases and a chorus that is all bite-sized intervals. Another singer might have inverted the stepwise descent of “it wasn’t lo-o-ove” in the chorus to go up rather than down or introduce a leap of a third to make a more distinct hook. Yet, that would sacrifice the space to belt the key change as well as the dead-simple singalong quality of the chorus.

Also, note that she bagged the feel-good for-fans-only message of “Born This Way” and the self-reference of “Applause.” This is just a song, not a meta statement.

Beyonce might be the better singer and Katy Perry and Taylor Swift now the bigger pop stars, but Lady Gaga seems to have recalled that her past success was predicated on the fact that the best pop songs are best even when stripped down to their underpinnings. Here’s Gaga debuting “Perfect Illusion” live (and NSFW) not on a network morning show’s sweet spot, but in sweaty London club The Moth. If she has more of this savage energy for us in store on her record, it’ll be a hit.