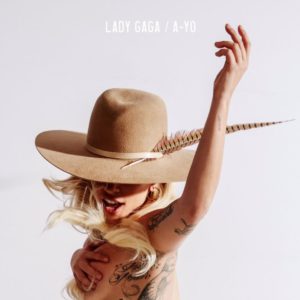 I’ll be dissecting Joanne song by song every day until November, when I debut some much bigger daily content!

“A-YO” is a fun, radio-ready clapper that might have done better over the summer months when its nonsense chorus could have been playing at every packed bar of vacationing college students. It’s got a steady bounce to it that feels just right for a smokey dance floor.

The first thing I noticed about the song is that it feels to me like a clap back at some of the newer acts that have co-opted Gaga’s place on the radio as dance pop stars, like Icona Pop and Charli XCX. Gaga has never gone for those trebly, hand-clap kinds of drum loops before, but they tend to mark the songs of those other stars. Here she uses them, but shamelessly sheds all of her typical synths for guitar rock instead (pushing it even more into Charli’s glossy territory).

One unmissable aspect of “A-YO” is the country tinge to Gaga’s clean, up-front vocal. Listen to the first line – How the “I” stays an “ah,” never closing to the dipthong “E”; the throaty A in “wait”; the drawling “aw” in “all”; and, later, the “uh” in other. It’s not a world different from the affect she puts on in “You & I,” but where that barroom stomp got dressed up in a Queen sample to glam it up, “A-YO” is much closer to a rock song.

She’s also pushing the country theme in the lyrics, as she name checks Marlboros, “tearin’ up” the gravel, “city gravy,” and more down South turns of phrase. The vocal twang and vocabulary at first seems like a strange combination with the modern rock guitar solos strewn throughout the song. It’s one of her most guitar-driven tracks of all time – I especially dig the adventurous mid-neck solo.

Once the chorus hits everything becomes obvious: this is Gaga’s take on a line-dance. It’s classic Gaga, especially with its rapid-fire chorus, but all of the production choices push it away from “PokerFace” and nudges it closer to “Achy Breaky Heart.”

It’s an interesting move from Lady Gaga. It isn’t as if one twangy song will get her played on Country radio, but there are some aspects of it clearly calculated for success. It’s a dancefloor cut that isn’t just for dance clubs. The bright, clear vocal takes her out of her clubland weirdo schtick and puts her in a realm of comparison with different artists. Yet, elements of the schtick remain intact, like the repeated words and phrases.

I’m actually surprised this wasn’t selected as the lead single, especially since it’s [spoiler alert!] a much better portent for the unusual remainder of the LP than the more disco-tinged “Perfect Illusion.” But, I’ll have more to say about that tomorrow.

Finally, if you had any doubts about the country thing, here she is playing it on guitar while wearing a cowboy hat and an embroidered shirt.