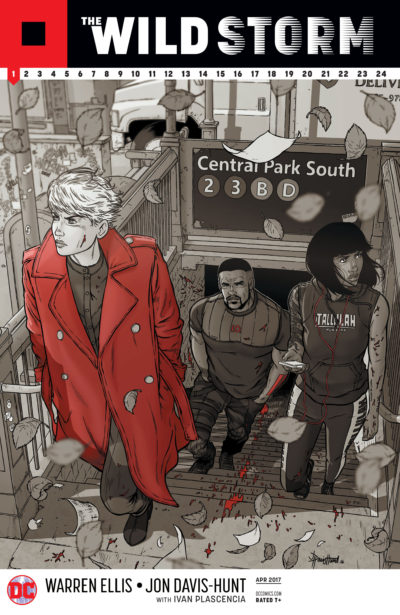 Compared to all of those, The Wild Storm #1 comes off a bit flat. Maybe it’s because we get to see every side of the main mystery, meaning we know more than the characters (not generally an Ellis hallmark). Or, perhaps it’s that half the issue is spent telling and even repeating rather than showing. 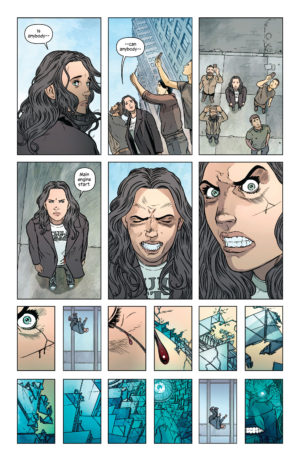 The teasing two-page introduction of Zealot as a buttoned-up assassin with blood spatter to suggest her warrior woman past is the most obvious fan service here – not only to WildCATs but of Ellis’s own Red.

It’s also the most tangible thrill in the issue, with Zealot seeming petite and harmless against the violent backdrop of her handwork. Her cryptic warnings about contamination from the body are the most-interesting hints dropped in the issue.

On the opposite swing of the pendulum, two-pages with the oblivious and ominous pop star version of Voodoo feel like wasted space – a hint dropped too early in the series and a pause to early in the issue when we’ve just got our hearts racing.

The best reinvention is the diminutive Jacob Marlow as a charming, Steve Jobsian CEO who is a secret alien. It makes a lot more sense than the sudden billionaire ladies man conjured by Jim Lee and Brandon Choi in the original WildCATs launch. Less successful is a younger and more droll Miles Craven, who reads exactly as Tony Stark, Director of SHIELD.

There are a lot of panels on the pages here, from six- and nine-panel scenes playing out like movie storyboards up to one 17-panel page which could be its own flipbook. Jon Davis-Hunt is mostly known for work on 2000AD and Judge Dredd. He brings a literal plainness to the title that’s grounded in reality, reminiscent of Jamie McKelvie.

Part of that plainness is down to a desaturated color palette from Ivan Plascenia, who only allows the red of blood to pop out from the unattractive blue-orange cast that permeates the book. It’s as if grounding a story in reality means it has to be the color of dishwater.

Perhaps this issue would have been better as a Rebirth-style launch special so that its multiple character introductions could have more space to breath. As issue #1, it feels like it’s trading heavily on existing good will in these characters to keep me interested in a second issue. Without that, it would feel like any random indie comic book first issue, with nothing to suggest Ellis’s pedigree. There’s nothing about it to recommend it to a new reader.