I’m sure on some level that’s based on the vicarious “home from school” thrill that comes along with them even now that I don’t have any school or work to be home from. More than the thrill, though, there is the wonder. A chilly world covered in white. The familiar landscape transformed into a topography I cannot readily recognize. Even on days I still had school or work my eyes would twinkle with delight on the trudge to the trolley.

Plus, now I get to experience it alongside a tiny person!

Unfortunately, today’s blizzard was not the spectacle of last year’s – complete with fluffy mounds of snow taller than my toddler and a white-out at twenty feet. That day our neighborhood was a wonderland of which I remind EV constantly to make sure her memory of it is cemented. No, today was alternating crunchy flakes and freezing rain, creating a heavy layer cake of ice crystals I can still hear neighbors struggling to upend as I write this. 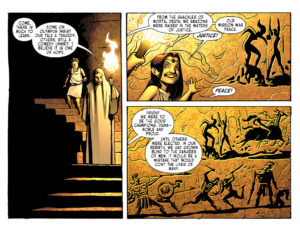 Thus, EV and I engaged in another time-honored snow day activity: curling up on the couch and reading comic books.

EV has some of her own comics, which she reads until the point of disintegration – mostly Lumberjanes and the spectacular (and local) Creep. She also loves some of mine, particularly Ms. Marvel and Spider-Gwen.

Somehow in the process of making my regular new comics order I wound up with an extra copy of the anthology-style Sensation Comics: Wonder Woman, which has laid dormant on EV’s bookshelf for months.

Suddenly, the past two days, she’s completely obsessed with it. And, well, Wonder Woman was my superhero gateway drug, so I’ve been over the moon to see her carrying the book everywhere she goes. Thus, today after reading her the brilliant Jason Bischoff / David Williams mother/daughter story with Hippolyte from issue #4 , I turned to EV and said, “Would you like to read a real Wonder Woman comic – the ones that I read back when I was a kid?”

I saw the little stars light up behind her eyes before the sibilant, “yessssss,” escaped her lips. 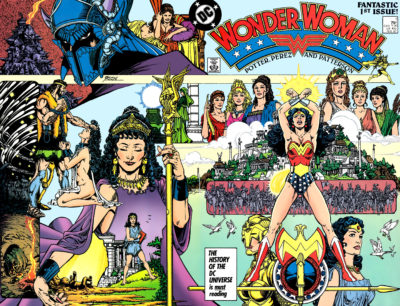 You see, about a year before we had EV I decided that despite not having read Wonder Woman in years that I wanted to own all of it – collections for the impossible-to-find Golden and early Silver Age material, but then floppies from as far back as I could manage to present day.

I’d enjoy knowing I owned it, and maybe the hypothetical eventual child E and I had discussed would be interested in the and I’d have them bound into one massive set of hardcovers to keep on the bookshelf like a set of encyclopedias.

Not only was today a magical snow day, but today was that day. I read EV the first issue of George Perez’s 1987 post-Crisis reboot of Wonder Woman’s mythology.

She stared at every page in slack-jawed amazement. This wasn’t the superhero comic she was expecting, but a story about Greek Gods (which she knows from her treasured Encyclopedia Mythologica pop-up book, and also from Lumberjanes). The gods plotted and struggled, and eventually gave birth to the Amazons, one of whom in turn created a child from the clay of Themyscira’s shores.

“That baby is Wonder Woman,” I told EV, and we turned to page to watch her growing up before our eyes from a baby to a girl and then to the wonderful woman who has been my role model for over three decades. 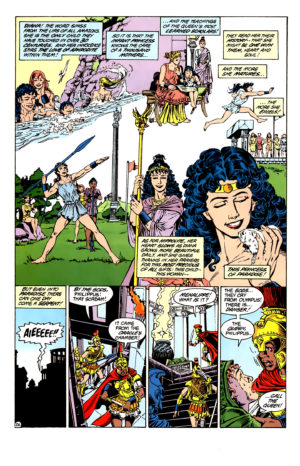 “Look, she’s as old as me!” she exclaimed at the little Diana, working on her reading. “Look, she’s a teenager!” she proclaimed, as the growing Diana exercised with the other Amazons. “She’s talking to the animals!” she said, at Diana cuddling a tiny varmint. That was Artemis’s gift to her, I explained – “unity with the beasts.”

Perez’s Wonder Woman #1 is a perfect comic book, utterly flawless in execution. It’s not a superhero story, and for that reason I feared EV’s attention might not hold up for a second issue. Would we be back to an umpteenth read of Lumberjanes.

She looked up at me with those starry eyes.

“Can we read issue number two?”

Every time we finished an issue, EV demanded another. We read seven issues of Wonder Woman – and, these are 1980s comics each with as much script as a short play! There’s only three fights! It’s mostly about research and language barriers! And EV devoured it. The only reason we stopped reading is because she wanted a few minutes to walk around the snowy wonderland outside before the sun went down.

I’ve enjoyed so many aspects of my time at home with EV this past year, but this is a day I’ll remember. A day we did nothing but sit on the couch and read comics. In its way, it’s the only thing I ever really wanted from parenting – to have my child understand something that affected me so deeply at the same age.