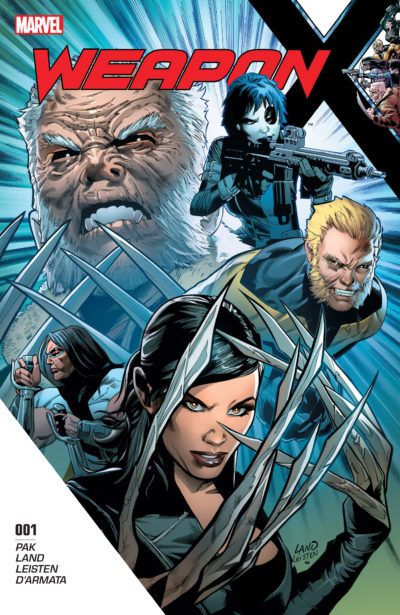 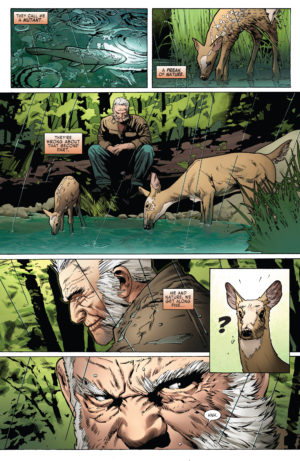 Why is Deathstrike held captive? Why is a secret program out to capture Wolverine and Sabretooth? And, what do two very different mutants – Domino and Warpath – have anything to do with it?

As a first issue, Weapon X #1 does a terrific job of asking a lot of questions while still presenting some action and moving at a brisk pace. It felt substantial and and kept me rapidly turning pages on my first read. On re-read, it’s in a bit of a rush and has a few throw-away pages of decompression that could have been more substantial in order to set up its cliffhanger.

It seems as though Weapon X will be a (fourth) vehicle for Old Man Logan which uses him almost exactly like present day Wolverine. That’s deeply annoying, since the lack of Wolverine was meant to be – you know – a lack of Wolverine. Pak finds some moments to differentiate the Old Man based on his long time in the ruins of humanity. 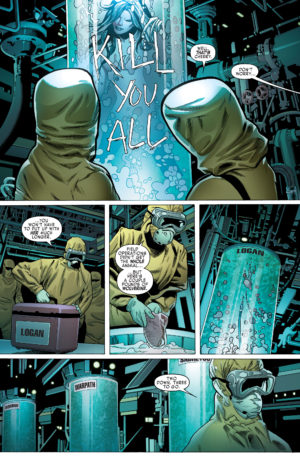 He’s eager to think the best of people he encounters, but he knows from experience he must anticipate the worst.

That’s plenty of character exploration of Logan for me. If I wanted to delve any further into Old Man Logan’s psyche I’d be reading his solo book by Jeff Lemire. Smart writers know that putting Wolverine on a team gets issues bought, but that the heart (and bulk of the material) tends to come from other characters.

Pak’s at a bit of risk in that none of his other characters are especially popular on their own aside from Sabretooth … but they make for a great action movie cast, which is what this book feels like thanks to the work of art team Land, Leisten, and D’Armata.

Penciller Greg Land gets a bum rap from a lot of fans who object to his frequent copy-and-paste figures and identifiable tracings from other sources. However, that opinion is now rooted in the Land art of over half a decade ago.

Since then, plotters have found ways to get the best out of Land and we’ve discovered that he’s an able penciler whose cinematic eye for framing doesn’t disappear when he stops tracing figures.

Land’s progression continues here, so much so that I did a brief double-take – thinking maybe he was with a finisher or a different inker than his typical associate Jay Leisten. That’s not the case. Sure, there’s some familiar facial expressions here, but Land does a lot of drawing in this issue, and it looks great.

This issue ends with palpable excitement about what’s to come, because this book is predicated on a central mystery. Pak has a long track record of being the kind of author who delivers on this sort of set-up. Combined with Land’s widescreen sense of composition, I’m looking forward to delving deeper into the mystery of why Weapon X is on the hunt again.

Weapon X #1 will be collected in Weapon X Vol. 1: Weapons of Mutant Destruction Prelude. Want to know what Old Man Logan has been up to so far? Head to the Wolverine guide to see where he has appeared. And, be sure to read my reviews of X-Men Gold #1 and X-Men Blue #1!