If I was Britney Spears’ manager her big comeback would’ve went down a hell of a lot differently than the hot mess that graced the VMAs.

(First of all, that atrocious club single is not going to get her back to her bestselling days. They really should’ve got her a vocal coach and pitched a Britney unplugged with two new songs and followed up with a hybrid acousti-dance album, a la Madonna’s Music. But, too late for that…) 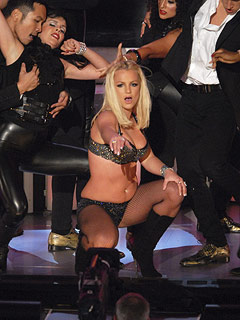 My version of Britney’s performance would have started the same as Sunday’s – a mopey, slightly chubby, lip-sync-flubbing Brit Brit would emerge with her dancers and mime through a verse.

Then, when all looked dire (but not as dire as tonight’s performance), the song would start skipping, a la Milli Vanilli (or, for the younger crowd, Ashlee Simpson). Then the music would cut out, leaving a befuddled Britney staring into the crowd, helpless. Then, one of the male dancers would turn around and say the song’s opener, “It’s Britney, bitch.”

Suddently you would realize the dancer was her! But, instead of doing a strip-tease out of the suit (as she has in the past) she would just toss her hat to show off her crazy post-buzz hair at actual length and color, and proceed to just wail the song live without correction to the best of her ability while strutting around in a killer tailored suit.

The audacity of the emphasis on real hair and real vocals with less dancing and less skin would have left everyone’s jaws on the floor.

Honestly, I’d be good at this stuff. It’s a shame I’d prefer to get famous myself…