You are here: Home / Personal / off-topics / people / elise / Filmstar and The Substitute People

I want to tell you about one of my fantasies.

I fantasize about being a substitute person.

If you don’t know what that means, you clearly don’t watch Elizabethtown as much as E and I do. At one point, Kirsten Dunst’s Claire – a perennial second-place finisher in a life and love, muses: 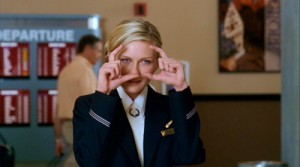 I’ve always had the fantasy of being the substitute person, but it took Claire to put words to it. Usually my fantasy goes like this:

A musician I really love – let’s say, Amanda Palmer – is in town, but they are touring without a certain band member – usually a guitarist or harmony singer. I’m at the concert, and when they start to play one of their big hits they stop and ask, “Does anyone know the [guitar/vocal/cowbell/whatever] part to this song? [I raise my hand.] You do? Come up here and try it.”

And then I get up and, of course, play the solo or sing the harmony to perfection, because I am obsessed with it. And then they ask me to sit in for another song. And another one. And then I hang out with them after the show and they fall in love with me.

Sort of like Courtney Cox in the “Dancing in the Dark” video.

I’m sure you have a similar fantasy, even if you aren’t a musician. Maybe it’s about stepping in with a sports team, or filling a hole on a big project in your office. It’s the opposite of the Actor’s Nightmare, where you’re stuck on stage with no idea what to do.

The allure of the fantasy is that we’re the substitute people. Just like a substitute teacher, no one is expecting us to do much more than fill a hole. Then, when we are amazing (or, at least, more amazing than adequate), they fall in love with us.

Having the substitute fantasy doesn’t mean you don’t like your life. I love being half of Arcati Crisis. But, every time I listen to E’s Filmstar demo record I catch myself thinking “I could walk right up and play all of those bass parts, if they needed me to.”

Well, two weeks ago life put my fantasy to the test when I wound up behind a microphone at a Filmstar rehearsal with a brand new bass hanging off my shoulder.

To make a long story short, Filmstar found themselves without a bassist, and I was called on my flippantly mentioned substitute-person fantasy of playing with the band.

I did know their songs pretty well – well enough to noodle along to their EP. Well enough to play bass on all fifteen of their songs? I didn’t necessary know every key, chord, and rhythm.

Oh, and there was the little detail of my not having played bass for seven years.

I decided that didn’t matter – I wanted to be their substitute person. E asked me to fill in on a Thursday. My new bass arrived on Friday. I arranged all the songs for myself on Sunday. I knew all fifteen of them for rehearsal on Wednesday.

We played every one.

This photo of me playing bass is nine years old, and this is as big as you're ever going to see it.

Was I awesome? No. Am I a bassist? Not by trade. But as a substitute person I was solid – I showed up able to fill the entirety of the hole in their lives, probably better than they anticipated I could.

I don’t know how long I’ll keep substituting with Filmstar, or if I’ll keep loving it. At some point a long-term substitute becomes your permanent solution, and surprising adequacy turns into lingering disappointment.

I’ve decided i don’t want to think it through that far. For the moment, I’m living my fantasy, and playing in an awesome rock band with my wife.

Sometimes we get we want in the most unexpected ways. What’s your substitute people fantasy? Have you ever got what you wanted?