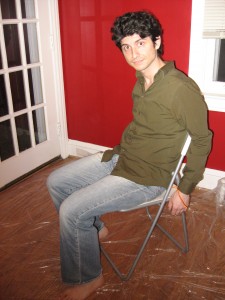 Oh, the things I'll do for my art.

Last night E tied me to a chair in the middle of our freshly painted dining room so I could research my novel.

You see, last night I was blasting out words at an amazing pace on the El when it came time for my protagonist to be cuffed to a chair.

Despite many contortions on the El, I couldn’t figure out how far he could stretch, or if he could stand up and walk. The lack of detail was killing me. My nonstop flow of words dried to a trickle.

I hurried down our street, rereading what I had written on my laptop, only twice stumbling off of the sidewalk and into hedges. I unlocked our front door, flung it open, and announced to E:

Honey, I need to you to tie me to a folding chair and take pictures of it!

I’ve always been afraid that I don’t know enough to be an author.

I’m obsessive about details. I always have been. As a kid I would compare stacks GI Joe file cards to make sure their stories were consistent. 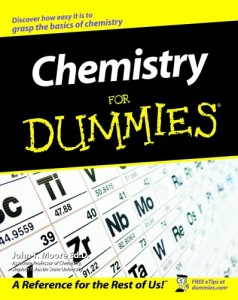 Oh the irony: Gina the chemist is writing a book and a blog, and Peter the communicator is learning chemistry.

I love getting lost in the fictional histories other authors have created, but I never thought I could create one of my own. I mean, have you watched the special features on the Lord of the Rings Extended Edition DVD? Tolkien wrote entire history books about his fictional world. He wrote a frickin’ language!

Me? I’m not well-traveled. I don’t know much about history. I haven’t taken science class since the 90s. I don’t know how anything works or how to take it apart or how to turn it into a bomb. I don’t even know the right way to describe a lot of things, like architecture or clothes.

That’s why I like writing songs. Songs have their own internal logic. Sure, they might reference something in the real world, but only for a word or two. 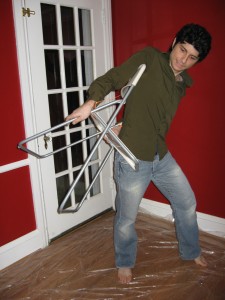 We learned that I would have to make an excuse for the character's feet not to be secured, because I was a deadly weapon with the folding chair tied to me.

Late in September Gina challenged me to do National Novel Writing Month. I didn’t say yes right away.  I spent all of October outlining my story and sketching the details of my characters. If I was going to join I wanted a mythology of my own.

While I outlined I hit a lot of gaps in my knowledge, but I didn’t let them stop me.  I’m smart. I can acquire knowledge. Better to start out with ideas.

A few of my characters  do things that involve some pretty intense knowledge of chemistry and physics. In my outline I glossed over the details, but now it’s time to write about them. I can’t always be asking Gina about every little detail, so to get started I bought Chemistry for Dummies.

And, last night I needed to find out how hard a character could swing a folding chair he was flexicuffed to in order to knock out another character, so I had E tie me up and take photographs of it.

Why? Because that’s what an author does.