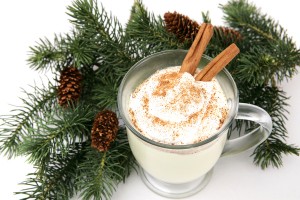 I always found eggnog to be a fairly terrifying topic of noshery. Sure, it’s like an instant milkshake, but the thing making it shakey is raw eggs.

Denise wore me down.

Denise is Gina’s mother, effectively my aunt at this point. I’ve been attending, playing, and now co-hosting her holiday party for ten years now, and every year she proffers several carafes full of egg nog along with a plentiful array of liquors to spike said nog with.

After several years she wore me down. I had my first sip of egg nog. AND LOVED IT, as I was both afraid and certain that I would. It’s like spicy little milkshake that won’t freeze your throat if you greedily gulp it – what’s not to love? My particular favorite brand is Southern Comfort, which has a particular spiceness that invites the alcohol of the same name to be added to the concoction.

The thing is (and, as alluded to above) eggnog is as terrifying as it is tasty. I wouldn’t drink raw eggs in any other setting, so why do it here? Also, though nog is charmingly suggested in half-cup portions (think of those wee holiday-party cups), I don’t drink anything in half-cup portions – certainly not anything that resembles a milkshake. And, in 8oz settings, eggnog is as deadly as it is full of holiday cheer.

Enter my beloved former boss Carol. I was going through a particularly militant/petulant phase of veganism at the time, so for her annual holiday cavalcade of food she brought me a carton of Silk Soy Nog.

Not only was it just as tasty as the real, eggy thing, but witness the nutritional head-to-head:

I’ve never looked back at the real deal. Which reminds me – I need to pick up some Soy Nog for the Shubin Theatre Holiday Revue on Saturday,  featuring Arcati Crisis as well as the highest holiday-decor:square-footage ratio I’ve ever witnessed inside of a habitable structure.