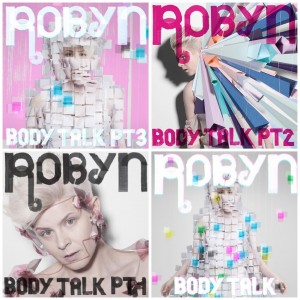 The covers of all three of Robyn's Body Talk mini-LPs (explicitly NOT EPs, according to her), plus the full length LP. Let's talk about how much I want to bite the awesome concept from BTp2 for my next demo cover?

Articles are starting to crop up calling 2010 “The Year of Pop.”

I am totally okay with that, because this year pop has had depth. It’s not just crossover hits from other genres. It’s not just prefab boy bands and girly girls. No. In 2010 pop was music created by auteurs, no different than singer-songwriters or rock bands.

Which brings me to Robyn.

Those of you from the 90s might know her mostly as the singer of “Show Me Love.” I complete eschewed pop at the time, so I have no idea about that. Hearing it now for the first time it sounds adjacent to TLC. All I know is that I’ve seen her name around for the past several years, and then somehow I wound up watching this video…

… and I was like – alright, that’s a decent song. I dig the clear Cyndi Lauper influence on the vocals. I dig the the relatively unprocessed, clear vocals over thrumming synth bass.

That was it. No further thoughts at the time. No urge to buy the song.

Then, in a spree of catching up on 2010 albums, one of my dear readers (and friends) recommended I check out Robyn’s Body Talk releases – effectively, three separate mini-LPs that she collected into one monster pop release. So, I grabbed Body Talk, Pt. 1 and played it while I caught up on some reading.

Hole. Eee. Shit. I was putting my book down every three minutes to check out the name of the next song.

“Don’t Fxxxxx’ Tell Me What To Do” is hilarious and deadly catchy. “Fembot” and “Dancing On My Own” stand up against the Gaga powerhouses of 2009. “Dancehall Queen” and “None of Dem” cop a reggae vibe without transgressing against Robyn’s synth pop. Then, “Hang With Me”…

… no words. I love huge pop songs deconstructed to simple elements, the acoustic piano, strings, and electronic burbles on that song killed me. And, this is a song she LEFT OFF the fuller Body Talk – or, at least, it’s the full synth version that appears there, not this lovely stripped-down take.

Needless to say, Robyn is going to be making an appearance on my 2010 Recommended Music list. Until then, check out Body Talk, Pt. 1 and consider grabbing a ticket for her February 3rd show at the Electric Factory so I won’t be dancing on my own.

See what I did there?