The CK extended family is rocking so many high quality shows of their own in the next week that I probably can’t get out to much else. While I might selfishly hope that you’re going to come out just to the fam events, thanks to the Philly Fringe Fest you have plenty of other choices.

This is my version of the highlight reel, the sole criteria for inclusion being: do I dig it? 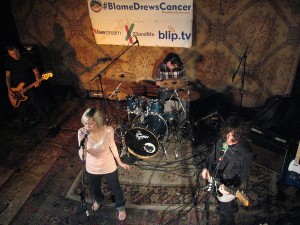 Filmstar playing the Blame-a-Thon, as shot by me.

Thursday, 9/8
Who: Filmstar, featuring your author and the lovely E
Details: 8p, $10, North Star Bar, 2639 Poplar St., Philly
Why? This will be my first time on stage at North Star Bar, though pre-me Filmstar rocked it at the now-legendary #blamedrewscancer marathon. We’ll whip out a few newer tunes, plus have copies of The Desperate Times EP to place in your hot little hands. We’ll share the stage with Mean, Secret Music, and Kyle Andrews.

Friday 9/2 & Saturday 9/3
What: The Gray Area, an original Fringe play produced by Gina!
Details: 8:30p, $10, The Walking Fish Theatre, 2509 Frankford Ave, Philly
Why? Gina & the rest of Ocelot On a Leash Theatre Company (of which I am a proud alum) have yet to produce a dud, and this is definitely not going to be the first. The company commissioned a series of Twilight Zone-esque short plays from local author Mark Wolverton and wrote some of their own pieces. To enforce the retro sci-fi Zone vibe, they’ll present the works in simulated black & white – including costumes, sets, props, and even the actors! If you miss it this week, the plays run again next Friday through Sunday at the Rotunda. 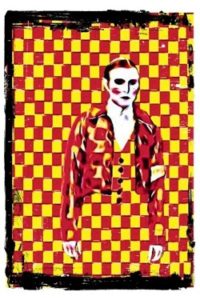 Wednesday, 9/7 through Sunday, 9/11
What: Checkers, an original one-man Fringe show
Details: various times, $15, The Fleisher Art Memorial Sanctuary, 719 Catharine Street, Philly
Why? Producer Mary Stewart is a longtime partner in crime of mine, and she acts as one of my major barometers of what’s good in the local arts scene. If she produces a show, I’m there. This year her choice is this one-man show developed by Mark Kennedy. In the spirit of Rosencrantz & Guildenstern Are Dead, Mark explores the life of a minor character from Witold Gombrowicz’s already-absurd fairytale Ivona, Princess of Burgundiam. In the original play, the royal family has it in for Ivona because she’s too ugly to contribute to their gene pool. Here, Checkers the servant turns out to be hopelessly smitten with the decidedly un-fair Ivona. I’ve already bought into the show via their Kickstarter campaign, mostly on the strength of their oddball Tumblr featuring posts from Kennedy in-character as Checkers.

What’s in store for the next week from the rest of my favorites? Behold:

Thursday 9/1
Who: Venice Sunlight & Stonethrown
Details: 8p, $8, North Star Bar, 2639 Poplar St., Philly
Why? Venice Sunlight is an awesome pop/rock band packed with slick riffs that puts on a high-energy show. Stonethrown is as close to Muse as you can get in the Philly scene – squalling rock with high-wire male vocals. They play first on a bill with Modern Suits and I Am Lightning.

Friday 9/2
Who: An Acoustic Evening with The Weepies
Details: 8p, $26, TLA, 4th & South, Philly
Why? The Weepies turned in one of the best albums of 2010, which I called “Cloying, cheerful pop-folk melodies so distinct that it’s often easy to forget that a band is playing beneath them.” The chance to see them reproduce those tunes in a stripped down show is hard to pass up.

Sunday 9/4
Who: Adrien Reju w/Pete Donnelly
Details: 7:30p, $10, Tin Angel, 20 S. 2nd St., Philly
Why? We’ve established I have a ton of local favorites, which maybe devalues my favorites currency – but not only do I adore songwriter Adrien Reju – E loves her. And E’s a hard one to crack when it comes to local music. With that double endorsement in mind, check out Adrien co-headlining a special birthday show with her producer from standout LP A Million Hearts. Last time we saw her she wielded a slew of unbelievably great new songs, which have now had nearly a year to simmer.

Thursday 9/8
Who: Brian Flanagan Band
Details: Noon, FREE! @ Love Park, 15th & Arch
Why? Brian Flanagan graduated from covers at open mics to originals to fronting a band that plays sure, 70s-style singer-songwriter acoustic rock in the vein of Jackson Browne and Brian’s influencers Ray Davies and the Kinks. If you’re a Center City worker, spend your lunch break with the tasty gourmet food carts in Love Park and enjoy a free serenade.