Here’s a recap of the X-Men hardcover and trade paperback collected editions out this month so far, penned by the (only?) blogger who owns almost every X-issue that’s ever been republished! Plus, a quick look at Marvel’s other collected releases.

Whether you’re a major X-Fan or a casual reader, I’ll share my opinion on what’s worth buying, and recap the rest of the field. If you have any questions, just let me know – I’m happy to help. This is a supplement to my Definitive Guide to Collection X-Men in Graphic Novels, which tells you how you can buy any X-issue ever printed. Ever.

If you’re new to X-Men in comics form, you should read my recent Intro to X-Men (on a budget) post. 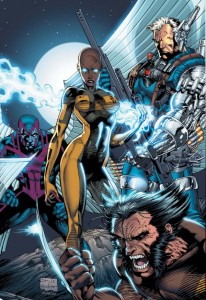 CK Says: Buy it! This hardcover debut of the 1990 “X-Tinction Agenda” crossover is as close as any single storyline collection gets to being an X-Men greatest hits collection. I already have my copy, and it is a thing of beauty.

As for the story, it brings together the various X-Teams after over a half-a-decade apart while introducing the island of Genosha, where mutants are abundant – as a persecuted slave-race! This collection lays the groundwork for future X-stories, including Grant Morrison’s New X-Men and the recent blockbuster Second Coming.

What other books came out in the first half of August, including a side-story book that outclasses it’s main-story brethren?

CK Says: Skip it. Daken is often a delight with his scenery-chewing and mid-battle flirting, but this collection isn’t his best. Writers Daniel Way & Marjorie Liu have to pull a sharp turn from Daken’s role as underling in Norman Osborn’s Dark Avengers to driver of his own destiny, and the process isn’t as arresting here as it was in the next volume (last week’s pick of the month). Pair that with artist Giuseppe Camuncoli’s blocky faces and Daken’s hideous costume and the book is a bit of a bore. (Also available in HC) 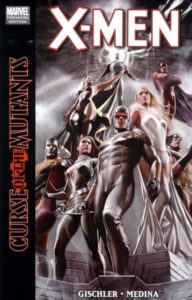 CK Says: Skip it. This vampirific tale from writer Victor Gischler is a tissue-thin story that never found the right pace. The six issues both race and drag, largely due to flat segments with a crowd of anonymous infighting vampires compressing our fleeting time with the X-Men. Also, the arc’s climax is reliant on a Hail Mary plan that’s as implausible as X-Men gets. The luscious cover art of this collection doesn’t reflect the interiors from Paco Medina, who has a sick, pleasing style that’s reminiscent of the 1990’s X-Men cartoon and a strength for clear, easy-to-follow action. (Also available in HC) 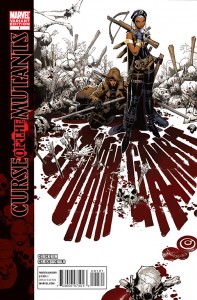 CK Says: Consider it. First off, ignore the atrocious cover art! While the main vampire arc was a clunker, these side stories are engaging and largely acclaimed. Particularly, X-fans on the web voted the Chris Bachalo drawn Storm & Gambit romp as their top issue of 2011! Smoke & Blood is a painterly horror movie featuring the X-Men’s X-Club of science officers. The two X-Men vs. Vampires collect a series of particularly strong short stories featuring an array of characters including Angel, Dazzler, Emma Frost, Karma, and the criminally under-used Husk. Plus, a recolored reprint of the classic Uncanny X-Men #159 featuring Storm falling under the sway of Dracula himself. Only the Blade tale is disposable – a pity it doesn’t really reference his Dracula battle in the recently concluded (and excellent) Captain Britain & MI:13. (Also available in HC)

(To complete the Curse of the Mutants TPB trifecta you’ll also want to pick up Namor, The First Mutant Vol. 1. No hardcover version was released, so the TPB has been out since March.)

Other X-books out this month: 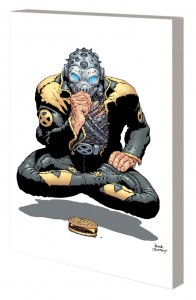 New X-Men by Grant Morrison Book 4
Collects New X-Men #127 – 133 in a pocket-sized format. Collects a decidedly strange set of issues from the idiosyncratic Morrison, including a Jean Grey adventure in Paris that debuts high-brow Deadpool knockoff Fantomex, plus the first appearance of Dust. While I enjoy all of the stories within, this edition could be skipped without missing much of the overall New X-Men arc.

Wolverine/Hercules: Myths, Monsters & Mutants TPB
Most random Wolverine side properties like this to get savaged by fans, but this mini-series had some favorable word-of-mouth even if it was tagged as inessential. Note that the interiors are not from incredible cover artist Frank Tieri. Also includes the pair’s first team-up from Marvel Treasury Edition #26.

X-Men: Fallen Angels Hardcover
Collects an eight-issue 80s mini-series of the same name that was the predecessor of Brian K. Vaughn’s Runaways. Here a handful of New Mutants (mostly Sunspot and Warlock) ditch the X-Men and become vagrants along with a motley crew that would become bigger players in the 90s – notably, Multiple Man, Siryn, and Boom Boom. I’ll admit, I own all eight issues and haven’t read them in ages. Maybe a review is in order.

Also out from Marvel this month: 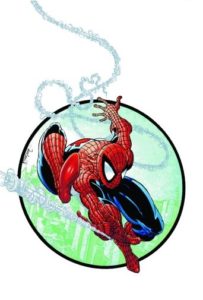 Recommended: Fantastic Four by Waid & Wieringo: Ultimate Collection Book 2 TPB
Collects Fantastic Four #67-70 & 500-502. This is an extremely strong run from Waid that re-centers the Fantastic Four as an inventive family and focuses on their relationship with Dr. Doom. You likely want to pick up Book 1 before grabbing this one, as it’s part of a continuing arc. Book 3 is out later this year. (I own this entire run as single volumes, so let me know if you have questions.)

Recommended: Amazing Spider-Man by David Michelinie & Todd McFarlane Omnibus Hardcover
Collects Amazing Spider-Man(1963) #296-329, plus some of Annual #10. Fans are going crazy over this massive tome collects the peak of Spider-Man late-80s and early-90s popularity – including the debut of Venom! Spawn-penciler McFarlane is on much of the art duties. I may not be a Spider-Fan, but I own a lot of these individual issues, and they’re good stuff.

A word on Amazon links: While I have some favorite graphic novel discounters, I regularly order through Amazon because it is easy to exchange books that come slightly dinged in the mail. I receive a minor referral credit if you order through these links; you get the same price you would always get on Amazon.