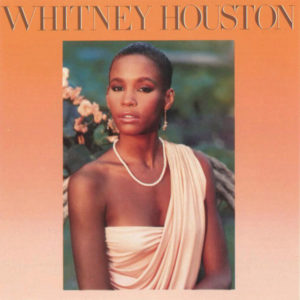 As a child I was of the firm belief that Whitney Houston was boring grown-up music because of the cover of her eponymous debut LP.

I liked it less than broccoli, and I think it’s easy to see why. It’s just a horrific album cover, and it screams “I am an adult album of blah-d-blah ballads about loving and kissing.”

As I kid I was all about romancing, but I had no interest in slow-dancing.

That LP of ballads did have one killer pop song on it, which is maybe how I got to know the album cover so well. The song? “How Will I Know.”

Whitney Houston is a rare artist that is all things to all people, and after her first album her image began to reflect that more clearly. She’s a peerless balladeer. She has a catalog of R&B standards. She sings exuberant, gospel-tinged dance/pop songs.

Even with her relatively meager catalog of LPs over the past 25 years, I don’t think it would be a stretch to affix the Greatest of All Time title to her name (save for perhaps her sad decline in the past decade).

“How Will I Know” is one of those songs I can sing on an endless loop while puttering around the house. I love that it has four distinct sections. Though the verse and chorus share a chord progression, the quick melody ascent in the verse works in counterpoint to the bassline – as opposed to the chorus and key change, where they work together.

Then there is the beautiful, sighing “don’t trust your feelings” section, perhaps my favorite pop mid-song slowdown aside from the “I hear your voice” verses of “Like a Prayer.” Finally, the funky “If he’s loves me” bridge, driven by the scant one-note guitar riff that separates the lyrics.

All of the things that make the song distinct made it a bitch to cover, even with the sheet music open in front of me. I wanted to play the verse and the chorus differently to make it easier for me to sing the verse melody, but they should be voiced the same to showcase the great bass riff of the song. It took some cycling through different keys and positions to find the right place (in F, a half step under the song’s actual key).

Then, the beautiful sighing sections became a problem because I was losing the rhythm. They actually caused me to speed up, because letting each single chord ring out at length seemed impossibly long. Finally, it was hard to decide which details to sketch into the bridge alongside the one-note riff.

Even when I figured that all out and a drum track to keep me at tempt, I still had to sing it correctly. The big note in each verse progression is the sixth of the chord that follows it, which means it always sounds wrong to me to sing. I had to fix the D in my mind like a constant drone to get anywhere near it for all four lines of the first verse.

(“How Will I Know” was always my choice for 1985 aside from Madonna songs, which are on reserve for a future project. I think the clear first choice from this year is Aha’s “Take On Me,” but that’s both a potential Arcati Crisis track and nearly impossible sing correctly in one try unless you are my freakishly talented little brother, in which case you do such things for fun just to taunt me.)