On the heels of last week’s first chapter of the rebooted origin of Justice League, DC Comics unleashes thirteen brand-new number one titles into stores this week.

As a non-comics reader, why should you care?

The entire point of this venture is to return comics back to something you can pick up casually, just for fun. DC is pairing its relaunch with making its entire line available digitally, including on the iPad. It’s also releasing a significant number of titles not fronted by white guys.

Will DC’s risky play to rejuvenate their readership by re-imagining their entire line of books be successful? Let’s see what this week’s salvo has in store, from my perspective as a relative DC neophyte. 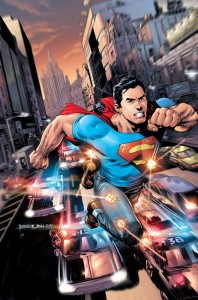 While Batman and company have expanded into a Wolverine-like dominance of the new DC schedule, the big blue boy scout has been relegated to just a pair of solo titles. However, if there is going to be a single solo hit of the new 52, this could be it. Industry shaman Grant Morrison understands what makes superheroes tick, and the art team is solid. I’m in love the cover shot of Superman wearing his own branded t-shirt, a pair of jeans, and work boots. This is a must-read.

What do I think of the rest of this week’s line-up? And, what books are you most looking forward to? 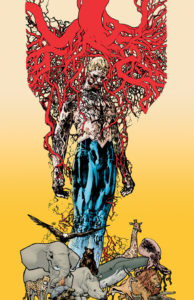 Animal Man is a punchline of a hero (he can adopt the power of any animal to scale with his human form) who has been distinguished in the past by superior scripting. As part of DC’s “The Dark” lineup he’s a wildcard, as scripted by novelist Lemire. I’m not a fan of the art I’ve seen so far, but the premise of his daughter manifesting powers could make for a compelling personal adventure. 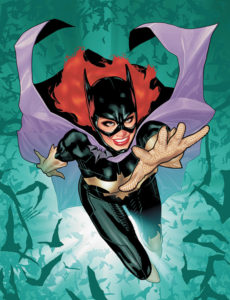 Even as a Marvel fan I know that former Batgirl and Commissioner’s daughter Barbara Gordon has been wheelchair-bound since being shot by the Joker in Alan Moore’s 1988 The Killing Joke. After 20-plus years sheis back in costume, written by consistent scripter Gail Simone, and with a knockout front cover by Adam Hughs. If the interior pencils can nail the same updated pulp tone as the cover this could be my new favorite female-fronted book – an area where Marvel is slacking. 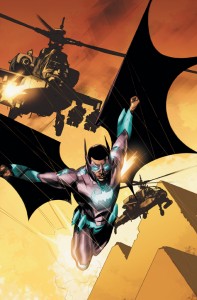 Before the reboot, Bat-book helmer Morrison established a worldwide syndicate of Bat-heroes called Batman Incorporated (an idea recycled from his run on X-Men 10 years ago). This title follows a new Batguy in Africa. MTV Real World alum Winick has the ability to knock a story out of the park, and he’ll need it for this newbie in the DC lineup. Color me intrigued, especially if he can inject a dose of actual geopolitics into the book. 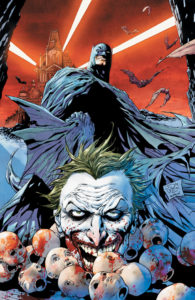 There’s no chance that DC’s flagship title will suck, but I’m totally in the dark on this creative team. With the creepy cover and a summary about a Jack-the-Ripper style of serial killer loose in Gotham I hope it will take Batman away from the Justice League heroics into more cerebral sleuthing. 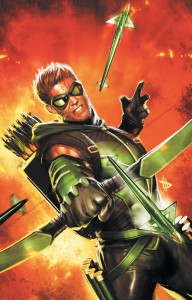 DC has a few love-letters to older fans ticked into their reboot lineup, and with the pair of classic artists Jurgens and Perez on one of DC’s core second tier of heroes this is a missive of utter adoration. As a non-powered hero with Marvel-style inner conflicts, Green Arrow is a rare DC character that breaks free of silly mythology to seem tangible. This should be a strong title. 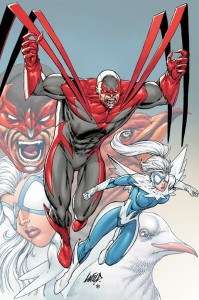 Let me get this straight – C-list heroes Hawk and Dove are caught up in a vast conspiracy against the US Government, as drawn by the perennial worst most-popular artist in comics? I don’t think I could be any less interested in a comic, but we’ll see if it merits a scathing review. 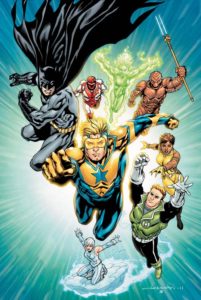 I’m intrigued by this Triple-A version of the Justice League. Not being a major DC fan I know Batman and Booster Gold, but I’m not familiar with the cast of Green Lantern Guy Gardner, August General in IRon, Fire, Ice, Vixen, and Rocket Red. Jurgens rarely steers wrong, but Lopresti is sometimes slightly staid for superhero fare, which could make Jurgen’s scripting come off stodgy. 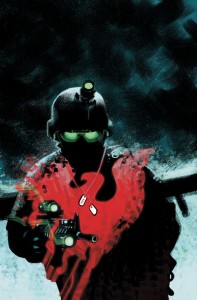 Another book on the militarized new “Edge” of DC’s lineup. From the description, it’s about an anonymous soldier who’s left to cleanup after the work of DC’s super-villains. Marvel has done this concept already to great effect in Damage Control, and the promo copy is a total flatline. Will this be a sleeper hit, or just something to doze through?

O.M.A.C. was comics legend Jack Kirby’s filler concept to run down his DC contract in the mid-70s – the hero an underling of a UN-esque organization, deplayed as a cyborg one-man army against threats around the world. OMAC was later recast as an army of cyborgs in one of DC’s big event comics. Here, a new unwitting participant is made into a cyborg. The success of the book will largely depend on how deftly the writers can weave a revised backstory of OMAC into glossy action. My expectations would be low, but DC co-publisher DiDio wouldn’t take on a pet project if he didn’t have a passion for it. We’ll see. 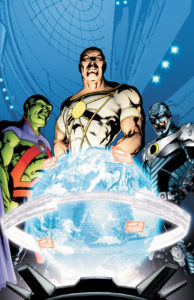 Here’s a curious thing. Stormwatch was one of the main pillars of Jim Lee’s Wildstorm imprint og Image Comics back in 1993. Warren Ellis elevated its profile with a lauded scripting run, and the concept was later was absorbed into the DC Universe when Lee joined the company. Here it’s launching under “The Edge” branding with DC veteran and Justice League exile Martian Manhunter, and a plot that connection to Action Comics #1. Paul Cornell was outstanding and funny on Marvel’s Captain Britain & MI: 13, but can he match the sci-fi shock of Ellis’s run? 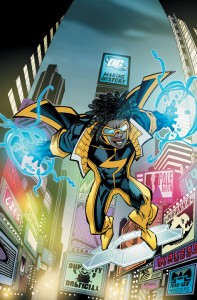 Part of DC’s “Young Justice” line-up of books (despite never being on the team of that name [Thanks, Morgan!]), this comic follows a young electrified hero who’s headstrong in costume and awkward as himself. I’m not familiar with the hero, but pairing the Peter Parker mold with art that looks like single cells of animation from DC’s Justice League cartoons is an attractive concept. Will this urban high adventure stand separate from DC’s mess of major teams? I kinda hope so. 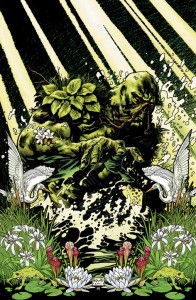 The reboot finds DC launching “The Dark,” a shadow-y subline of their hero comics that flirts with the more adult themes of Vertigo. Fitting, then, that on-the-fringe 80s hero Swamp Thing is anchoring the lineup (think a murkier Captain Planet for the horror set). Snyder is most DC-exclusive, but Paquette is a favorite of mine, and the sumptuous verdant coloring of his preview images is incredible.

And that’s DC’s first group of rebooted comic books. What did I get totally wrong? What are you looking forward to the most? Let me know in the comments below.