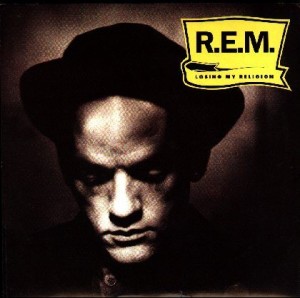 You can read a lot of different meanings into “Losing My Religion,” but to me it has always been a song about the status quo, and how some people are better at changing than others.

I’ve never been good at change. Not in the short term, anyway.

In 1991 I had the opportunity to leave my small, private, religious school to attend a magnet-school program at Masterman, which was (and is still) the best public school in the state. I wanted to stay. Why attend a magnet school with other smart kids? The MG program I used to go to was lame. Wouldn’t this simply be all lame, all day? Yet, clearly I needed to leave – my grades were dipping as I grew increasingly bored with my classes.

In 1991 my interest in music waned. I was much more interested in reading. This might have been because records began to be phased out in favor of CDs. I remember the last vinyl LP we bought was Madonna’s Like a Prayer in 1989. We didn’t have a CD player in our house until 1994. I didn’t want one; I didn’t want to have to buy my cassettes all over again. Yet, clearly I fell behind – when I look at the hot singles and albums from the intervening four years, much of it is unknown to me.

I’ve never liked losing my religion, but eventually I learn how to move on.


(Watch me cover “Losing My Religion” on YouTube. For more info on my 30 for 30 Project, visit my intro post or view the 30for30 tag for all of the related posts.)

(1991 was one of the trickier years for me to choose because of my LP-to-CD gap. It was always going to be this or “I Touch Myself.” I would not be surprised if you hear Arcati Crisis covering this tune now that I know how to play it. I never realized it was so simple! I memorized all the changes in about twenty minutes; this was my first play through the song.)