I was a major Image Comics fan in the 90s, and not just for the hyper-kinetic art of departed Marvel artists like Jim Lee. I loved Image because it frequently broke free of typical save-the-world tropes to explore superheroes as a separate society running in parallel to every day life.

Wildstorm Productions was Jim Lee’s imprint at Image, and it was home to every one of my favorite titles and stories. In 1999 Lee allowed DC to acquire the rights to the company so he could focus less on administration and more on creating. Twelve years later, Lee is DC’s co-publisher and penciling their flagship book.

As for the Wildstorm universe, it’s very much alive in DC’s reboot with Stormwatch and solo titles for WildCATs mainstays Grifter and Voodoo –  and they’re all more integrated with DC’s continuity than ever before. 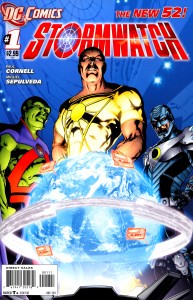 In a line: “Do we look like ‘super-heroes’? They’re amateurs. We’re the professionals.”

Paul Cornell successfully juggles a debut issue featuring a team of seven extra-powered beings, their super-powered quarry, a mysterious assailant, an extra-dimensional space station, a giant Himaylayan cornucopia, a claw in the moon, and one very giant eyeball with tentacles. Cornell manages to be amusing without resorting to all-out humor, and expository while only dropping a few utter bricks of dialog to explain the fast-paced plot.

Of three stories across four locations, it’s the team on the ground in Moscow that’s the 4-color thriller. A reticent would-be-hero does all that he can to evade a somewhat forcible recruitment by the Stormwatch away team of Jack Hawksmoor, Projectionist, and Martian Manhunter.

As for Martian Manhunter’s export to this title, his membership in JLA is mentioned offhandedly, but not explained – other than to say he’s a superhero there, but a “warrior” when he’s in Stormwatch. Does that mean he will show up in Justice League’s year one intro arc?

I loved the unusual artwork in this issue. It’s not your typical ultra-gloss of a superhero comic.  I’m especially a fan at the unsubtle, realistic face work – particularly Projectionist mugging in false humulity while Martian Manhunter first shows his green face. Many images include psychedelic overlays – I’m not sure if they’re the work of Sepulveda or colorist Allen Passalaqua, but they’re fantastic.

There were only a few minor disappointments. I like the scope of the cover – showing the core cast, rather than a frame from the issue, but it’s unflattering. Not sure if that’s a penciling or a coloring issue, but I feel like it’s ugly compared to the interiors. A few faces look flat, possibly a coloring issue rather than art. Projectionist’s power showing us an on-panel page of YouTube was perhaps a bit too on-the nose. And, a minor quibble, but the bold blue-on-blue lettering of the presence in the moon was a turnoff. It felt more like a computer read-out than a mysterious evolutionary force.

Stormwatch feels decidedly alien, and not just because of star Martian Manhunter and a station in hyperspace. The conceit of extra-dimensional heroes in suits who sneer at the the caped set feels more like Ellis’s superb Planetary than the DC I’m used to skimming.

Cornell is an oddball writer, and he didn’t have enough room to stretch out in Marvel’s great (but decidedly terrestrial) Captain Britain & MI:13. This fast-paced amalgamation of erstwhile-Wildstorm and reinvented-DC is a better fit.

Did he put too many balls in the air for a first issue? I say there’s no such thing. This is exactly what I was hoping for from Justice League – a brisk issue with more questions than answers, hints at multiple threats, and enough plot threads that I’m left pouting for a second issue right away.