Jim Lee set up an intriguing team in his 90s Image Comics classic creation WildCATs, a group of alien-human hybrids caught in a extraterrestrial culture war. Lee pilfered seemingly every comic origin out there to assemble a team full of clawed men, androids, amazons, shapeshifters, teleporters, dwarves, and strippers.

The team vigilante was Grifter, a half-Gambit half-Punisher hybrid of athleticism and gunplay with a Wolverine healing factor who seemed out of place on the spandexed team. Later, readers discovered Grifter was actually closer to the core of Lee’s new superhero universe than anyone imagined, having been experimented upon while he was in the army, and granted with psychic powers that later burned out.

Of all Lee’s heroes, Grifter makes the most sense to support a solo book – but which elements of his history would get picked up in this port to the mainstream DC Universe? 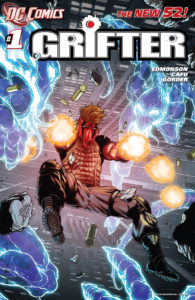 In a Line: “I think there’s one of them on this plane.”

#140char Review: Grifter #1 goes back to basics with the Wildstorm char, taking us to his origin. Thrilling little story, if too fast a read. Good, by a hair

See, that sounds exciting, doesn’t it?

In a brief, fun read, writer Nathan Edmondson combines swift action with a hint of alien intrigue to make a strong case for picking up a second issue, yet Grifter has several significant handicaps. The guns-blazing cover has nothing to do with the story inside. It’s not about an established DC character or mythology. It features its lead character out of uniform for almost the entire book. It is definitely decompressed, with some pages that could have been single panels as they repeat similar perspectives. It makes at least one verifiable mistake on the scale of minutes, hours days. There are a few points requiring major suspension of disbelief, such as an unattended midnight hat stand.

Cafu’s art is modestly strong throughout, with finely detailed faces but a few gawky bodies. His Grifter is slick but muscled, though occasionally comes off as a blonde Wolverine. I don’t think he’s earned the one-word moniker yet. Edmondson wisely reminds us of Cash’s special forces training via a subplot that will yield further conflict rather than a piece of kludgy dialog, which helps contextualize his many action-hero feats on re-read.

I think the issue was more successful than not. From the shocking murder that opens it to the hints we get about Grifter’s character, this has all the makings of a super-sized, high-gloss adventure free from the entanglement of the majority of the DC Universe.

The series and character might just live up to its WildStorm predecessor, though its still unclear how much of his history this new edition will share.