DC’s linewide relaunch disperses a few titles to interesting fringes of the four-color universe – army comics, westerns, and this medieval entry into the lineup.

While guns and horses might not be big draws for me, I love middle ages stories no matter the medium and the cover of this comic is to-die-for.

Why any hint of skepticism? The cover isn’t from the interior artist – it’s from Detective Comics‘ killer auteur Tony S. Daniel. Second, writer Paul Cornell – so witty on team books like Captain Britain & MI:13 and Stormwatch, seems like a peculiar fit for the thee and thou speech of Camelot.

Can Cornell dial back the quips while Digenes Neves turns in something to equal Daniel’s killer cover? 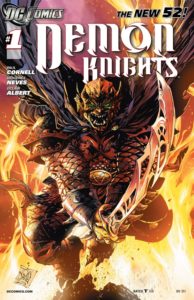 In a Line: “The Celts have odd ways. Nod and smile.”

Demon Knights #1 is a comic version of a popcorn flick – a fast-moving swords and sorcery tale that eschews period language for quips like “sod this.” It would be A Knight’s Tale if not for the absence of a soggy rock soundtrack (though I’m sure Cornell has one playing while he writes it), and perfect for the World of Warcraft crowd if not for a surfeit of whimsy. 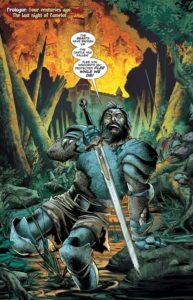 A two page intro ripped directly from the pages of The Once and Future King roots new readers on steady, familiar ground, before Cornell swiftly departs from the established myth and fast forwards four centuries. The story follows two Camelot cast-offs – Madame Xanadu, a renegade priestess of Avalon, and Jason Blood, a hapless youth who shares a body with Merlin’s demonic assistant Etrigan. In the present, a magical horde of pillagers and dinosaur-like humanoid dragons is tearing through the countryside to the fictional destination of Alba Sarum, and our erstwhile pair of heroes (and sometimes lovers, depending on who is in charge of Blood’s body) have stopped in pub directly in their path of destruction.

Any question I had about Diogenes Neves’ artwork compared to Daniel’s cover is answered by the first page, a knockout image of a storybook gone entirely wrong. We never get another reason to doubt him. His textured pencils are treated to an amazing interweave of delicate inks from Oclair and spiderwebs of crackling color from Marcelo Maiolom.

While the tone gets less less classically staid as we exit the Future King framing device, those careful details find their way into every page. Add to that a set of beautifully distinct faces and an attractive palette of pinks and purples and you have a stunning issue of art. 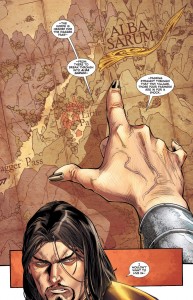 I don’t fault Cornell at all for not thee and thouing his way through the entire issue – it saps the life from characters and tend to be accompanied by horrific font choices. So why is this book not “excellent”? Cornell loses his footing as he ratchets the pace with every new character he introduces. By the final panel the plot has become a touch too frenetic for him to pilot surely.

While I understand the need to introduce all seven medieval soldiers to the plot, here’s one case where I would have preferred Justice League’s more leisurely pace of introductions. That said, like Jim Lee on JL, Neves provides plenty of opportunities to linger on each panel – it’s just that here the lingering is a welcome pause before the script rushes forward.

Even with the modern language and rapidly accelerating pace, Demon Knights is a highly enjoyable read due in no small part to Cornell’s wit and an unassailable and altogether stunning set of artwork from Neves, Oclair, and Maiolom. Everything here points to more fun to be had in subsequent issues, which I will definitely be reading.

(Disclaimer: I have a major soft spot for British comic book humor, sorcery, dragons as dinosaurs, woman with swords, and villains who heartlessly kill children. Basically, I am this book’s target audience. Your mileage may vary, but if you need bonus background see the outstanding blog Gone! Gone! The Form of a Man!, which is dedicated to annotating eacb issue with all the mythological and cartographic facts you need to digest it fully.)