As I’ve been writing these reviews I’ve been studiously staying away from everyone else’s reactions.

I don’t want to be influenced by other readers. This process is about my read as a DC newbie and dedicated X-Fan. I catch a single tweet review on Tuesday nights from @CheapGNsdotcom, and do some debating with @Matropolis over the course of the week, but otherwise I don’t peek at other ratings until I’ve set mine into writing.

On a few occasions (Batgirl being one), when I feet in my gut that a book was so incredibly amazing or awful, I can’t help myself but to check to see if everyone agrees with me. 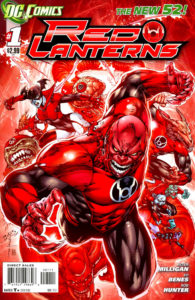 I feel the need to caveat that I have never read a Rainbow Lantern book before and may have entirely missed the point of this entire endeavor.

Red Lanterns #1 is a comic full of interesting elements that work against each other as a whole. Peter Milligan can be terrific at manipulating oddball teams. The Ed Benes art was consistently awesome. Even the concept of a revenge-powered Lantern corps isn’t a turnoff for me.

The execution was simply off. Milligan’s been there before on his stultifying X-Men run. No amount of awesome art can save a badly conceived comic.

The opening torture scene can’t decide if it wants to be dire or comedic, and introducing a violent space-faring attack kitten with rippling muscles who is bleeding from his mouth would seem to peg this as a offbeat humor title, a la Lobo. The kitten continues to cough up blood all over its captors in what seemed like a mildly funny scene until it is saved in a display of over-the-top violence by a good (bad? (good?)) guy named “Atrocitus,” who proclaims, “What are you doing to my cat?”

Nay. Not when the unbearably lugubrious Atrocitus then launches into a totally emo inner monologue that takes up half the issue. It becomes obvious that this is not meant to be a laughing matter. Also, apparently all of the Red Lanterns exhale blood all the time, or blood-like red energy? That’s the impression I got when we saw a slew of them on panel, each more silly-looking than the last and all breathing blood. This includes a sexy blue-skinned babe with bone wings and a dental floss bikini bottom who can only speak in single word growls.

So, it’s a serious, violent, ultra-bloody, emo humor title with an unintelligible hot babe who craves only range and showing showing off her ass like it’s a trend? Well, they’ve got the pubescent boy demo locked down.

(The irony is that right now Marvel’s hands-down best book is the similarly-themed Uncanny X-Force, except there blend of brainy humor and continuity references alongside the blood, guts, and skin-tight outfits is done to dizzying perfection by Rick Remender. But, maybe a DC fan would hate it.)

Milligan’s scripting failures aside, Benes art is hard to deny – he’s really enjoyable throughout, especially on a tease of Hal Jordan in a flashback. However, the red on red on red color palette really begins to wear after a few pages with the RL gang. An Earthbound b-plot is a snooze, though I suppose it’s setting up an Earthling to be a Red Lantern.

DC returnees and longtime readers might really delight in the side-story behind Atrocitus, but without existing affection for the concept I think it really falls flat.