In the 80s DC was the edgy comic book company. Even before the launch of Vertigo, they were the publisher letting a new generation of writers use their heroes in non-traditional ways.

While Grant Morrison may be the last oddball left standing from the period, it was ushered into existence by Alan Moore. It was Moore’s hand that guided the landmark Watchman and deconstructions like Killing Joke. He made it possible for the Morrisons and Gaimans of the world to be mainstream comic authors.

While the modern day might treat Watchmen as Moore’s opus, he was already writing bizarre 70s eco-hero Swamp thing for nearly three years by then.

Both Moore’s verdant hero and Morrison’s Animal Man are seeing reinvention in the reboot. Will either hint at the success of their 80s glory years? 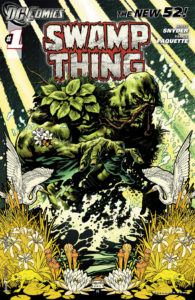 In a Line: “I had this Botany professor, Dr. Riis … he would always talk about how the plant world is the most misunderstood area of biology.”

140char Review: Swamp Thing #1 is utterly gorgeous in the hands of Paquette, but it’s all Swamp Talk (+ a dull lecture from Superman) & no Swamp Thing. Lame

I’ll come right out and say that I completely hated this script for this issue. It’s the only one so far from the reboot that felt deliberately decompressed, aside from the wreck of Justice League.

Swamp Thing being a dark hero with roots in Alan Moore stories is meaningless when it comes to a fresh start. While Scott Snyder does plenty of explaining via pages upon pages of dialog, it never stops being expository to start being compelling. As a reader who has no idea about the character the talking didn’t really help – it was like listening to a conversation on a bus about someone I’ve never met.

Snyder inserts plenty of heavy-handed one-liners, like “buried alive” and “raised from the dead” in an attempt to make a dull B-story seem like a portent. The chatty issue was made more jarring by a weirdly out-of-context Superman acting like a camp counselor, completely at odds with both other versions we’ve seen so far in the reboot.

The saving grace is a beautiful rendering of an inert script by Yanick Paquette. If he can make dead birds and talking heads look this good, imagine what he’ll do with an issue that’s actually about Swamp Thing?

Despite a gripping into and a final panel giving a hint of what’s to come, this issue is skippable due to the interminable bore of its doughy middle.

Previous Post: « Awake and Asleep with Taxicab Racers, and other stories
Next Post: What I Tweeted, 2011-09-11 Edition »