You are here: Home / Personal / topics / thoughts / Make Your Own Holiday (or, Welcome to NaBloPoMo)

There. I’ve confessed it.

I thought I had escaped the costumed oppression when I graduated college, but my friends are more rabid about it now than ever – even the ones without babies. 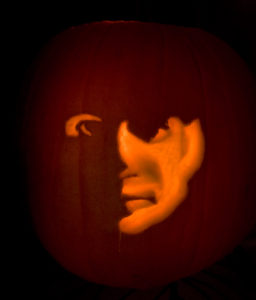 E's rendering of your author in the medium of pumpkin. Licensing my image was the extent of my holiday celebrations.

Yesterday I gawked as E hustled to welcome an oncoming fleet of tiny trick-or-treaters to our doorstep and bowl of premium candy. She carved pumpkins, donned her masquerade mask, and pulled massive bags of candy from their strategic hiding spots that prevented me from consuming them.

(You see if you can resist a bag of Heath bars and Take Fives for an entire week if it’s in plain sight.)

Lest you assume my grinchy-ness is a recent, being-a-yuppy-related development, allow me to reveal that I only went trick-or-treating a handful of times as a child. Once I was Gem, because she was truly outrageous and the only rock’n’rock role model for children at the time, even if she was a girl. A few years later I was a pirate (yes, a male pirate, but only on the condition that my Aunt Susan would dress up as Like a Virgin era Madonna).

I think it’s clear where my priorities were, even at age seven: pop culture over tradition; rock over holidays.

I have never spent too much time considering my anti-holiday vendetta. Have I always been so resistant to the cult of the mainstream that I can’t even celebrate the same day they do? Are holidays too consumer and not enough DIY for me? Is this the symptom of a only child of divorced parents, who could never have the holidays he saw on television? Am I simply a contrary bastard?

It’s not like I don’t like to celebrate. I can party, whether that’s a dance-party or a food-coma kind of party. I just don’t want to party the same tired way everyone has been partying for twenty or a hundred years already. 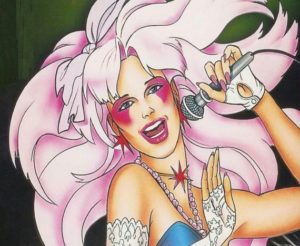 Go ahead, picture me at age six dressed up like this ... and then admit to yourself how truly, truly outrageous I was. Also: aside from the pink wing, a not-terrible predictor of my adult pastimes.

Instead,  think to celebrate a thing I need it to be imbued with personal meaning. I don’t dispute that some people get major meaning from the 4th of July, or Thanksgiving, but the standard-issue holidays never ring true for me. They already have too many other meanings ascribed to them.

I’d prefer to make holidays my own. I’ve done it for Thanksgiving and ::shudder: Christmas. I simply haven’t found a way to compete with the masquerade massacre of Halloween.

No, not All Saints’ Day. November 1st is the kickoff of my favorite month of the year, thanks to National Blog Posting Month – where the entire universe of blogs endeavors to post every day.

Even if I don’t post daily, I’m sure to undertake some insane project while my friends and colleagues are busy recovering from their candy comas to travel to see family and work on their holiday shopping. In 2006 I recorded thirty songs in thirty days! Last year I wrote a book! This year I’m mixing two EPs and writing another book. And blogging, hopefully daily, while playing at least one show with each of my bands.

November 1st might be All Saints’s Day to some, but to me it’s “The Starting Line.” I’ve been dreaming up some big project all year, and November 1st is the day that I begin to make it a reality.

That’s way cooler than one night of playing dress up.

Whether you like the “real” holidays or not, I’m sure you’ve got a few of your own. A massive party to usher in the harvest? An annual drunken viewing of the Golden Globes? What’s your DIY holiday?