This weekend I was up late writing, and turned on the film of A Hard Day’s Night in the background to keep me awake and alert.

It kept me more than that. It’s a funny movie that unleashes a stone cold classic Beatles song every six or seven minutes. 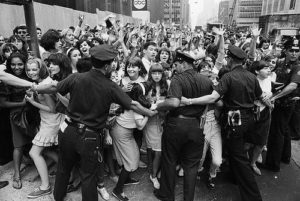 As my gaze drifted up to the screen again and again I noticed the fans. The film is full of them. While everyone from businessmen to make-up artists treat the fab four as a commodity, the fans who are screaming their heads off are invariably teens of both ages, and slightly older young women.

I think about today, and who that same demographic of fans is screaming for. I’m sure a few artists come to mind, yes? I’ve sampled them all, but I wondered – would I be willing or able to recognize if they were producing music even a fraction as beautiful and groundbreaking as The Beatles’?

Case and point, I typically assume Taylor Swift songs are going to be fizzy pop affairs with obscenely catchy chorus hooks. Not that there is anything wrong with that – hell, I aspire to it. I listened to “Safe & Sound” from The Hunger Games soundtrack expecting more of the same. I got something other than I was expecting. I’m certainly not comparing it to The Beatles, but “Safe & Sound” is an amazing song. Fitting, that it comes from the movie of a book I nearly wrote off as Popular YA Fluff and wound up devouring.

The song is so beautifully organic, with production that makes it sound as though Taylor and The Civil Wars are sitting right beside you as it plays. Notice the imperfect guitar plucking, sometimes evoking buzz from the edge of a fret.

There are a couple of bits of pure magic here. The endlessly-repeated, never-resolved simple melody hook, that turns into a canon in the middle of the song. The eerie, almost spooky underneath harmony from The Civil Wars. How the song hints heavily at an impending major crescendo with an increasing artillery of percussion and then never actually arrives there. As Jacob pointed out to me, how the menace of the arrangement belies the title. And, finally, how it absolutely sounds as though it could come from within the world of The Hunger Games.

It’s a great song, and I hope you still gave it a chance after you saw it was by Taylor Swift.

(Thanks to Jacob, my personal hero of snark, for turning me on to this song!)