E and I are sharing a slice of Internet Fame today courtesy of CBSLocal Philly via their auto correspondent @MikeyIl (who you may recall from my epic interview with him last summer). 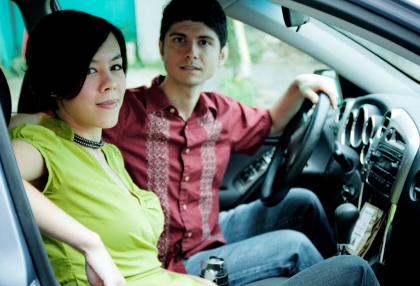 Shot by MikeyIl for CBS Local.

My only prior auto-related run-in with Mikey was when he drove me to a concert in a pimped out ride he had on loan for a week to write up for a blog. Many months ago, Mikey put out the call for Philly residents with cars they really loved that were less than five years old. Feeling pretty strongly about the utility of our Toyota Matrix, E and I volunteer and wound up with an interview and photo shoot with our car! It’s our first shared press!

You can read the entire interview and see Mikey’s photos at CBSLocal Philly. As a bonus, here are a few exchanges from our interview that got wound up on the cutting room floor:

DYR: Does your car have an nickname?

E: I’m leaning towards Molly, though after Molly Weasley or Molly Bloom, I’m not sure.

DYR: Where did you get your car from? What/where was the dealer?

P: I didn’t even have my license when we bought the car, so a big test for us was if the dealer would actually talk to Elise about car stuff. I didn’t even know which side the gas pedal was on – I was there solely to haggle. I actually staged a walk-out mid-conversation at one dealer who didn’t seem as though he was actually listening to what Elise was saying.

Locally we work with Ardmore Toyota. Except, if you’re me, you sometimes call Toyota of Ardmore OKLAHOMA … which would explain why everyone answered with southern accents for a whole week that one time.

DYR: What’s your favorite or worst part of your commute?

P: I commuted to work once all summer. It was about five minutes shorter than my SEPTA commute but, unlike the El, I was not afraid of catching syphilis during the ride.

Oh, and this non-sequitur:

P: Elise is the best car-packing Tetris player I’ve ever known. She can make anything fit into anything.