You are here: Home / consume / Crushing On / #MusicMonday: Heart – “These Dreams”

E and I saw Heart at the Tower Theatre on Friday, a classic-rock date night sequel to our spur-of-the-moment decision to see the Pretenders a few years ago.

I don’t adore the entire Heart catalog like I adore that of The Pretenders, but I do love a great number Heart songs – especially from their first three albums. That acoustic-driven galloping rock is definitely in the lineage of Arcati Crisis; I’ve always been fascinated that Gina isn’t a particular fan, given her similarities in writing and performance to the Wilson sisters.

Of course, those Heart albums were all before my time. My actual introduction to the band was most like the video to “These Dreams” in 1986, which to me at the time might have plausibly seemed as though it came from the Labyrinth soundtrack. 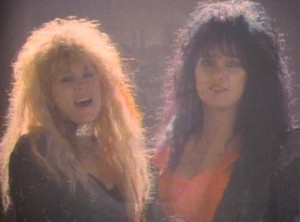 Don’t worry, I won’t subject you to the entire video.

I was always confused by Heart on Casey Casem’s count down, because in their videos they were made up just like the big-haired rocker guys I was so bored by … except, these were… women? I felt like I should have liked them, but this was in their “All I Wanna Do Is Make Love to You” period, a song Ann Wilson won’t even sing today, so could you blame me for not liking them?

Yet, these were also the acoustic-rockers who spawned hits like “Barracuda” and “Crazy on You.” What gives?

I read Heart’s new memoir Kicking and Dcreaming overnight on Friday, and it explained the peculiar duality of the band. Heart nearly dissolved when they left CBS Records imprint Portrait in 1982, and when they reformed for Capitol records they began performing songs by other writers in an attempt to fit in on rock radio. It brought them their greatest success – including their first number one single, “These Dreams,” one of their few songs with Nancy Wilson singing lead. 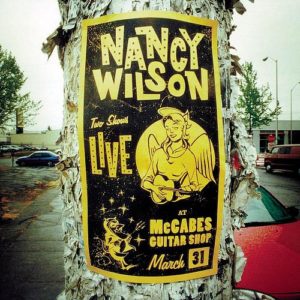 My obsession with not purchasing an $18 copy of Nancy’s live acoustic solo record lead me to snag the early Heart discs from the bargain bin.

I’ve always been obsessed with the song, but the synthesizer- and reverb-drenched original never really sounded right to me. Back in college while I was trolling through the CD racks at Tower Records I noticed a peculiar lone title in the W section – Live at McCabe’s Guitar Shop by Nancy Wilson?

That Nancy Wilson? I picked up the case an examined the track list and, LO AND BEHOLD, it included an acoustic version of “These Dreams”! But, it was $18 – far too rich for my blood when it came to CDs.

I eventually did buy the album, after picking up those early Mushroom and Portrait LPs with the encouragement of my old colleague Alex. I’ve never been one for those Capitol albums, though. Their stadium rock sound also mean that Nancy’s acoustic leanings were muffled and later altogether drowned out.

Happily, that wasn’t the end of Heart – in the past decade they’ve refocused on their old-school sound with a bluesy tinge on three solid studio albums.

That also means that on tour they’ve reclaimed some of their excessive 80s hits. On Friday they brought me to tears with an acoustic version of “These Dreams” with Nancy on mandolin that flowed directly into an acoustic and piano duet on “Alone.”