As I fall asleep, I think about cells rapidly dividing.

Nothing is ever a sure thing, but I am pretty sure we are pregnant. 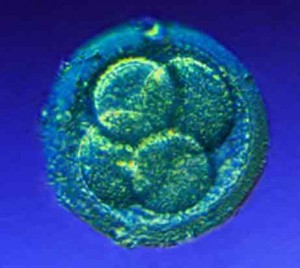 We have been trying for a few months now, where “trying” means (close your eyes, future offspring) having sex with a little more consternation and chart-making than usual. I mean, depending on your usual sex, I guess.

This time around I don’t think it would be projection to say we both felt a little different as the week wore on. When we woke up yesterday, after much devil’s advocacy from both sides we wanted to take the test. I inquired if I needed to hold any sort of papers while E peed on them and was rapidly dismissed.

“No, I mean, what should I be doing in case you come downstairs and tell me we’re pregnant? I don’t want to be surfing the internet. This is a big moment.”

“It is,” she acceded, maybe fidgeting impatiently.

“How long does it take?”

“I’m going to play a song. Something I wrote. A song about you.”

I played a song called “What Do You Want From Me?” which in retrospect was a peculiar choice. It’s a song about being an imperfect partner and lover, and being afraid you aren’t enough how you are. I don’t think I chose it with any intent, but it was a decent enough selection for five minutes of being Schrodinger’s Expectant Father.

She returned during the last verse and proffered me a tiny strip of paper full of arcane writing and a series of red lines.

“What am I reading here?” I said, squinting down at the paper. 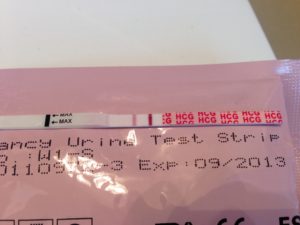 Of course, this is me we’re talking about. E is growing a baby while I harbor an OCD Godzilla. She would need to test again. I would watch. Luckily, this was not the pee right on it sort of test. There was a sort of shot glass full of urine for testing purposes. Is that too much information? I’m just trying to be transparent about the utter ridiculousness of the situation. This is how new life is discovered.

We tested and I watched. Like a hawk. From two or three inches away from our second little urine-soaked paper strip while E kept time on a digital watch.

“I definitely see a second line.”

We were pregnant. Definitely. Probably.

“Can we just dip a fistful of the strips into the pee to be sure?”

She sighed, exasperated, maybe realizing she was in for nine months of me being the crazy one … and, that even if her hormones allowed her to briefly surpass my crazy, Godzilla and I would spring back into the lead and maintain it for the majority of our offspring’s 18 years of childhood.

“Imagine,” I encouraged E later in the day, “if we had a way to make just one or two of those cells the best possible cell right now. We’d wind up with a 12.5% better baby!”

That was most of the baby chat for the day. We’re not too precious. But, as I turned over in bed to face E all that was on my mind was cells that were once one and are now many, more even since we discovered them in the morning.

That was our baby.