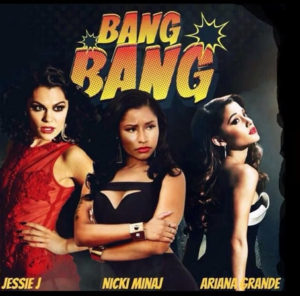 One of many fan-made “Bang Bang” promo covers with a decidely retro feel.

I have always loved Motown. This post is about Jessie J’, Ariana Grande, and Nikki Minaj’s late-summer hit, “Bang Bang.”

These two statements are closely related, I promise.

I grew up revering Motown music. I was obsessed with “Stop! In The Name of Love,” and listened to Oldies 98.1 WOGL on every car ride with my father. The beauty of the great majority of Motown songs is their disarmingly simplicity. The classic and seemingly complex “I Want You Back” is mostly just one endlessly descending bassline. Smokey Robinson created intricate riffs and harmonies over the simplest of blues progressions. My favorite dance tune – “Ain’t Too Proud To Beg” – distills down to just one pair of chords.

As it turns out, simple songs with clearly distilled messages are hard to ignore.

This presents a terrific conundrum when it comes to Motown covers on acoustic guitar. “I Want You Back” translates to plenty action on an acoustic guitar, and Smokey songs can be dressed up or stripped down as you choose. Yet, other songs lose their sing sans arrangement and bassline. Plus, what to do with “Ain’t Too Proud To Beg” – so simple in its execution that it hardly holds together on one instrument? There, the power must be in your delivery and interpretation – there’s nothing spare to dress with.

Which brings me to “Bang Bang,” a raunchy summer slam from two of the hugest young female voices in pop. I heard it for the first time a few weekends ago while standing in a cell phone store, and my immediate first reaction wasn’t, “Who is singing?” or “Why is the production so huge?”

Nope. My reaction was, “This is so Motown!” I tried to explain it to E later that day, but not being the Hitsville connoisseur that I am she didn’t wholly appreciate the distinction. However, when I confessed it to Ashley in Smash Fantastic rehearsal yesterday, she shrieked, “I know!”

At which point we attempted our first cover of the ridiculous hot weather confection that is “Bang Bang” and discovered its true Motown realness: It’s just one damned chord! C7, over and over again. I thrashed it over and over in rhythm while Ashley annihilated that crazy Jessie J vocal that starts on an Eb. (I claimed Ariana’s verse as my own, as I love belting to her range. We are still negotiating over the Nikki verse.)

The similarity doesn’t stop there. Despite the decidedly unsubtle chorus, the first linee in Grande’s verse is practically cribbed from pint-sized Michael Jackson, “She might’ve let you hold her hand in school. But I’mma show you how to graduate.” Is that so different than the punnish innuendo in “The Love You Save,” where he sings, “When Alexander called you, he said he rang your chimes. Christopher discovered you’re way ahead of your times!”

It remains to be seen if Ashley and I can make our cover interesting enough to hold its own sans all of the arrangement and production on the studio cut, but at least now we understand why the song screamed “Motown!” at us on first contact.