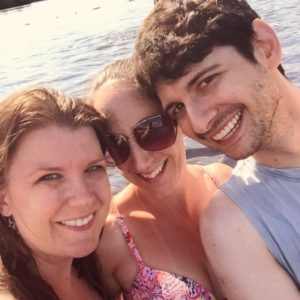 EV yells this at me almost every time she catches me browsing Facebook, and it always surprises me. No, it’s not because Lindsay is omnipresent in my feed – she’s too busy parenting and adventuring for that! It’s because of my profile photo. Not the postage-stamp sized square on my profile page, mind you, but the teeny 20ish pixel persistant image in the header to reminder you that you are surfing as you.

Mine is a photo of Lindsay, Erika, and I (with EV just off-camera, dangling from my arm) standing in a lake in New Jersey during a rare roommate reunion day over a month ago on a very sunny Friday – one of the rare days in over two years where I have done zero start-up-ing for an entire waking period.

(Alright, that’s a wee lie, I did check my email for 15 minutes in a parked care while EV dozed in the back seat, but that’s practically nothing.)

It’s not surprising that EV could recognize the picture in its minuscule size. That’s just recognizing a pattern of an image – even easier than recognizing the actual faces. She is good at playing the game Memory even though she doesn’t know what all the cards are.

The thing that’s surprising is that EV recognizes it and instead of just saying it’s a picture of me (which she does with frequency) she remembers Miss Lindsay, who she has met just three times in her life. She remembers lots of things about Lindsay. Her daughter’s name, her doggie, and how we picked blueberries and then went swimming.

Our outing with Lindsay and Erika was the first time I witnessed EV have a specific, persistent sense of time and recall. As we approached the date she understood we would see Lindsay and Erika tomorrow, and then she remembered we saw Lindsay and Erika yesterday. But then she kept remembering it, mentioning it, telling stories about it, and asking about when we’ll do it again.

Today on a walk with a co-worker I was relating this story and I realized that Lindsay sticks out so specifically to EV not because she’s so awesome (EV will learn that in due time), but because our day together was memorable. In fact, I’m now sure it is among her first persistent memories. Yes, she recalls trips to the market, times down the slide, lyrics to songs, and hugging her aunt Jenny, but none of those refer to a specific incident that she recalls with detail.

The other night she turned to me solemnly after dinner and said, “Take a picture, send it to Miss Lindsay.” We had an impromptu photo shoot and sent Lindsay the results, to which she texted back, “I love her!” I feel like every parent talks about creating memories for their children – heck, Disney’s entire marketing machine relies on it – but here I did it unintentionally just by spending the day with my daughter and two of the people I love the most in the world.

Previous Post: « Newly Released Graphic Novels & Collected Comics – Sept. 1, 2015 Edition
Next Post: Are my eyeballs really only worth $4 to you? »