Image Comics knows what’s up with finding readers outside of the Direct Market. Valiant, too. Really, everyone except DC and Marvel.

These companies realize that buying the first collection an untested property from an author you may or may not know is a risky proposition, and generally not something you’ll plunk a $20 down for. That’s why nearly every Image first volume trade paperback is a handy $9.99 – which puts it in the five to eight dollar range when you buy it online.

That’s the story of how I wound up with a copy of Birthright, Vol. 1 – a $6 gamble on a book with a beautiful cover that evokes Sword In The Stone with hints of more dire elements along the edges. I was completely unfamiliar with creator Joshua Williamson by virtue of him solely writing for DC after his first pair of creator-owned works, both short-form. That’s changed in the past two years, with Williamson writing a trio of ongoings for Image – Ghosted, Nailbiter, and Birthday (plus Robocop for BOOM!).

When I wrote up Nailbiter in last week’s new comic roundup and decided to grab the first volume (again: $6), I realized I had another Williamson book in my in box (an actual longbox) waiting to be read! 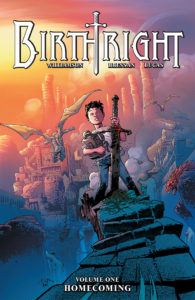 #140char review: Birthright is Goonies crossed w/Sword In the Stone plus something sinister, like Harry as an agent of Voldemort. Bressan’s art = perfection.

Birthright is a batter of different genre tropes that baked up into something a lot tastier than its individual ingredients.

Birthright is primarily a Chosen One narrative in the Joseph Campbell model, like Star Wars and Harry Potter before it. Where it deviates is that we’re getting the story after the fact, and we see that part of the reason all of those stories end so pat is that the orphan hero tends to make some choices that haunt him after his victory. That’s the case here with young Mikey, who disappeared into the woods on an early birthday without a trace during a game of catch with his dad.

Here’s where creators Joshua Williamson and Andrei Bressen do something a little weird. They spend their start-up issues focusing on the human trauma behind a child who disappears, writing a family drama and a police procedural for a few pages before the fantastic main plot gets underway. It’s a risk. It gets a little too simple at points (random cop dude insists, “He is a security risk.” To what, exactly?). There’s a repeated rubber-band snap as we get yanked out of the fantasy-themed pages we crave and back into a dingy interrogation room. Yet, that tension and genre-hopping is what marks Birthright as not the hero story we’ve come to expect. It’s what makes this book a page-turner even before the biggest twist is unfurled.

The remainder of that success comes from artist Bressen and a remarkable set of colors from Adriano Lucas. Many indie comics are well-executed but don’t achieve the right color palette or gradient shading, but here Lucas breathes three-dimensional life into Bressen’s characters. They nearly leap off the page when they are in motion.

It’s difficult to say more without completely spoiling the super-punch surprises of the plot here. It turns out that the fantasy world has an ongoing relationship with Earth, as represented by several unusual visitors who have crossed over. They are working at cross purposes to each other, and it’s hard to know who to trust – especially if you are a family that has been shattered by grief for the past year. Would you believe anyone who told you what you wanted to hear and offered you a means of putting your life back together? Or, would you be skeptical of everything offered to you after such a tragic loss? How Mikey’s family answers these questions divides them down the middle.

Ultimately, the heroic tale and the familial drama are one and the same, and to enjoy them both you might need to forgive the police procedural portion of its weaker spots. What shines through each element is that the whole Chosen One business is unfair. It picks on kids who don’t know who they are or want to be and it tears families apart by necessity. Every one of the four family members has been damaged in the process, and with so much book ahead of us it’s unknowable whether they can help each other heal or if the wounds will just fester.

The dual-worlds narrative plus a last page reveal might leave you a little cynical that this is very much a post-Saga derivative. I’m optimistic. I believe in Williamson’s easy scripting and the consistently gorgeous visuals from Bressan and Lucas enough that I’m signing on for a full-priced second volume. Birthright has the potential to be a lasting epic if it can keep up the momentum of this first five-issue sprint.