You are here: Home / consume / reviews / Review: Talking Is Hard – Walk The Moon 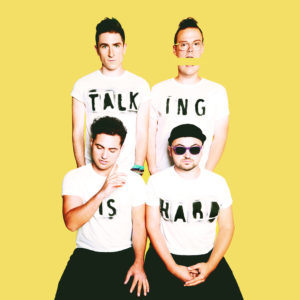 I am terrified that Walk the Moon are going to be a one-hit wonder.

Let’s be honest – “Shut Up and Dance With Me” is absolutely that kind of song. A “867-5309” or a “Jessie’s Girl” or “Take Me Home Tonight,” an exuberant male anthem of sudden and unrequited affection that might not last past its consummation, complete with a shimmering and anthemic chorus and a quick solo into a refrain. It feels like that.

I’m terrified for them, because it’s clear they did it intentionally. They do it again and again on Talking Is Hard. I added it to my collection begrudgingly to learn the single for our cover band, and after one listen it became the first LP to supplant 1989 in the “unadulterated pop perfection” category that the most earwormy albums scratch for me.

Opener (and new single) “Different Colors” feels very of-this-moment and modern rock-y. You know the thing: snotty vocals, throbbing synths intertwined with guitar, wordless falsetto hook. There’s something about the refrain, “this is why, this is why … we bite the bullet, we know the kids are right.” It’s something more than the now of modern rock. It’s like Third Eye Blind crossed with Duran Duran. They hit the latter harder on “Spend Your $$$” but it also has a certain Talking Heads quality with the repeated breaks into falsetto, with a little flavor of “Psychokiller.”

The lack of surprise is the surprising thing about this album. It’s of this moment, but it’s not about trends. Yes, there’s “Portugal,” where the synths quote the vocals and visa versa so many times that you’ll lose track of which is doing which at what point in the song. Yet, even there is the plaintive, “Take me with you, ’cause even on your own you’re not alone.” Nicholas Petricca’s voice is pliant and sweet, with just the right amount of explosive belt before an able and imperfect falsetto, in the pop-crossover male mold set by Brandon Flowers last decade.

Just as the guitar intro to “Shut Up and Dance” is pure Edge with the churning arpeggio atop a sparking delay effect, and just as it apes those infatuated 80s anthems, the entire album is a careful study in wearing your influences on your sleeve. “Work This Body” pure Paul Simon without the self-awareness of Vampire Weekend, a well they hit again on the chorus of “Sidekick.”Aquaman” is almost a straight up cover of “Sexual Healing” via its canned drums and synths, but there’s something so “In Your Eyes” about each phrase of the melody.

Only occasionally does it get so by-the-numbers anthemic that you could be a little cynical about it – on the very OK Go “Up To You,” the post-Franz Ferdinand “Down In The Dumps,” and the by-the-numbers single “We Are The Kids,” but if those are the weak tracks on your album you are doing something very, very right.

Walk The Moon is doing something very, very right. I stand in the kitchen and debate with spirit what ought to be the next single. Every song is mentioned. I hum and whistle the hooks on my walk to the bus when the songs are not even on. I am still not sick of “Shut Up and Dance With Me” despite listening to it 100s of times to get the rhythms just right for our cover, but it is no longer the song I am most excited to hear on this album.

You can be a band that wants to sound 80s, or you can be band that knows the playbook of a decade so back-to-front that your album feels like a piece of it despite being completely modern as well. That’s what Talking Is Hard is – and it’s an instant classic.

Honestly, I don’t think I need to be too worried about the one-hit-wonderdom of a band who can string together 11 potential singles on a 12 song album. I think I’m less terrified for them as I am for myself, because I need other people to understand how perfect the album is and mythologize it they way they do other single-laden breakthroughs like Jagged Little Pill or Songs About Jane. It’s that good.

Previous Post: « into the toddler groove
Next Post: Ex Machina is the worst movie I have seen in 2015 »