Last week I kept Bob The Drag Queen in the top spot despite Chi Chi taking home dance captain honors. This week Bob strutted her stuff on the Empire parody – so, do I still have her leading the pack? And, where will returning queen Naysha Lopez wind up? 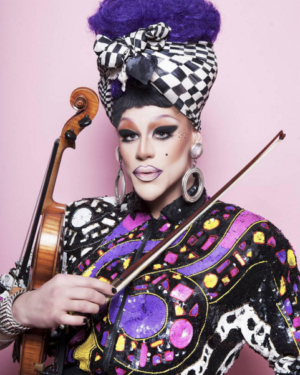 The lovable Thorgy hoscotches to the top spot this week with impeccable acting (maybe the best ever on Drag Race?) and a perfectly on-theme and girly runway. She truly should have won the episode over Bob’s ad-libbing spectacle; more on that in a moment.

This lady has all the chops this show requires – including being a classical musician, which means she’ll likely be decently equipped for musical challenges. Aside from the willfully silly streak we saw last week I don’t think she will commit any unforced errors. Also, it seems like the plastic showgirl opening look was an example of how hard she commits to each look rather than a fashion faux pas, which is a good sign for future runways.

Altogether, my initial read of, “She’ll never be the next drag SUPERSTAR” has evaporated completely. She’s quickly becoming the star of the show, and she doesn’t have the confidence gap of Katya.

How did Bob descend in the rankings while winning a challenge? Because this episode exposed just how reliant she is on her charisma and comedy to get her through other, weaker spots. She bested the challenge by constantly going off-script – a lot – which wasn’t really the assignment. Then, on the runway, she was in a busted Halloween costume look with flaking makeup, a bit of a belly, and an inability to roller skate, all of which she sold through comedy.

Bob remains my personal favorite, but I’d like to see a decisive win from her while playing the game, rather than deconstructing it. Right now I feel she’s at risk of that awful top four cut.

This was a watershed week for Naomi – she won a mini-challenge, lead a fantastic challenge team, and showed she can speak up and be funny when needed. If she can step-up her runway slightly from constant boy-body nudity to some eleganza we’ve got a contender for the engeneu spot in the top three.

Chi Chi is a mega-talent who was sure in the challenge this week, but her runway was one of the worst of all time – a plain green bikini and skirt with too high boobs and a manly body beneath without much cinching or padding.

I doubt we are going to see her do badly in a main challenge, but I’m getting seriously worried about her runway looks doing her in when the group gets smaller.

Kim Chi squeaked out of this challenge with a screeching, over-performed character. That’s not such a bad thing, but can she pull out the obnoxious loudness again without Faith Evans telling her what to do? On the runway, her feathered corset parroting a parrot had too many plain panels – it didn’t feel like a complete look. I’m simply not feeling her ability to stick it out unless her outfits keep escalating.

Here’s where I had our darling Ms. Cucu, Cynthia Lee. Her runway tonight was truly dreadful, but I still would have taken the chance to boot the marginal Robbie Turner over this delightful lady.

It was interesting to watch Betty play a character with a mental illness because it put on display how intentful her constant stream of nastiness truly is. It’s not that she cannot help it – she make a decision about it every time. She can control the face pulls and the tone and be charming.

Eventually, Ru Paul is going to pick up on the fact that she’s not just ACID, she’s TOXIC (keep in mind, we haven’t seen too much workroom Ru yet), and that will be the end of Betty. Ru doesn’t mind a villain, but we are not going to see someone truly mean sit down to a tic tac lunch.

Despite the drubbing she took, Derrick was fine in the acting challenge and okay on the runway. However, her lack of ability to stand out is going to hurt her soon unless she lands herself solidly in the top group for a challenge. Also? Her wigs haven’t been great.

Robbie was weak in this challenge and again displayed marginal makeup and hair on the runway. As for his skating lip sync? It was proficient, but not too exciting. There is nothing about Robbie that screams “winner.”

Naysha wasn’t too bad in her first week back – her acting was decent, and her runway may have been the best. Yet, does she have it in her to shine brighter than these other ladies for weeks to come? She’s the most anonymous queen of the bunch, doesn’t lip sync well, and still doesn’t know how to sew. I think it’s going to be curtains for her pretty soon.