I don’t think that I ever did. In fact, I had not consciously formed much of an opinion of it at all given my scant signposts of Patsy Cline, Garth Brooks, and Shania Twain.

However, a thing I’ve learned about being an adult is that sometimes the unconscious – both your own and the collective – decides something on your behalf, and that determination lingers in your mind in the place of an actual decision until you realize you’ve started making other decisions based on it.

Case and point: Country music. I don’t hate it. Yet, from absorbing a “my truck” here and a “my woman” there from songs playing in the background of life, I was passively assuming I hated country music. People at Smash Fantastic shows would request country songs from time to time and I would selectively ignore them. When Ashley gently suggested that it was finally time for us to learn a few country songs for the band, my reflexive response was, “UGH, NOT COUNTRY MUSIC.”

Despite that, I love to please a crowd, so I looked up a few of the artists that had been shouted in our direction. One was Eric Church. I fired up iTunes and YouTube to see what his most popular song was and they came back with a resounding answer of “Springsteen,” from Church’s third album, Chief.

Fast forward six months and “Springsteen” is AKA my favorite cover song to sing and my toddler’s bedtime song and generally just a fucking masterclass in songwriting.

To get to that realization I had to stop hearing the twang in Church’s voice, because it was activating that unconscious bias of “UGH, NOT COUNTRY MUSIC.” Honestly, it’s a tiresome affectation on any singer, especially when it’s obscuring wonderful pop songs or gatekeeping them from the wider consciousness. You just have to hear past it to get to the performance and the lyrics. Singing it yourself aids in that, if you are able.

Somewhere between that setting sun, “I’m On Fire” and “Born to Run”
You looked at me and I was done. We were just getting started.

Beneath the twang and beyond the minimal band arrangement is the wonderful device of singing about how to find a person who doesn’t exist anymore. Not his long lost high school lover – she’s still walking around in the same town, skirting the edges of his life.

No, the person that no longer exists is his long lost high school self, and the only way to find him for a moment is to hear Bruce’s ragged baritone.

There’s no part of this song that says, “So let’s get back together.” That’s not the point. The closest he comes is suggesting “there’d still be a spark.” He’s not seeking an illicit final kiss. He’s looking for the one person who, if they were to lock eyes and hear one of those songs, could travel in time with him back to that prior self and all of the blithe, foolish love and hubris that came along with him.

I bumped into you by happenstance. You probably wouldn’t even know who I am,
But if I whispered your name I bet there’d still be a spark.

Back when I was gasoline and this old tattoo had brand new ink,
And we didn’t care what your momma’d think about your name on my arm.

Baby is it spring or is it summer, the guitar sound or the beat of that drummer
You hear sometimes late at night on your radio

Even though you’re a million miles away, when you hear “Born in the USA”
You relive those glory days so long ago 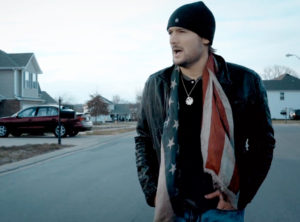 That second verse is perfection. If it won a hundred pounds of award statues they wouldn’t be enough of a reward for how good it is. Listen as Church methodically unravels the layers – first the physical present day, then the physical past day, then the ephemera of memory, and then just the sound.

I don’t have those memories, but when I am on stage and I sing about the spark, the gasoline, and the tattoo ink I am there. I’m moved to tears thinking about the guitar sound pumped out by a tinny transistor radio sitting on the sill of an open bedroom window in the dead of summer, the guitar riffs from those classic tunes overdriving its inadequate speaker, me glued to the sheets by the sweat from my back, smelling the sour dry grass of unmowed lawns and thinking about her.

Except, now I’m not pining for that girl, I’m pining for me. Youth. Possibility. Imagination. Love. The magic of hearing your favorite song for the first time.

Beneath that I have another, newer layer: how I am now twice as old as his lost self and I am making new memories with this song in the present day, singing it to EV as we splay colorful stars across her ceiling and get ready for bed. Over weeks of singing it together, our version has evolved.

[Or, if I am holding her up above the projector: “Think about the stars on your butt?,” which was her contribution to the adaptation process.]

In our version, it’s the song “Springsteen” that makes the memory rather than the man, and I think one day later in life when EV hears it on some subconscious level she will still see the stars on her ceiling and smile wistfully at her own lost girl, never to be found again.

You can find the person, but the melody becomes a memory.

(If I have one critique of the song, it’s that it doesn’t reward the listener with a final chorus. When you’ve got a chorus this good, it’s not enough to play it two-and-a-half times. When we cover it, we deliver a final full chorus after another round of “whoa-oh-ohs” and then end on “Springsteen.”)