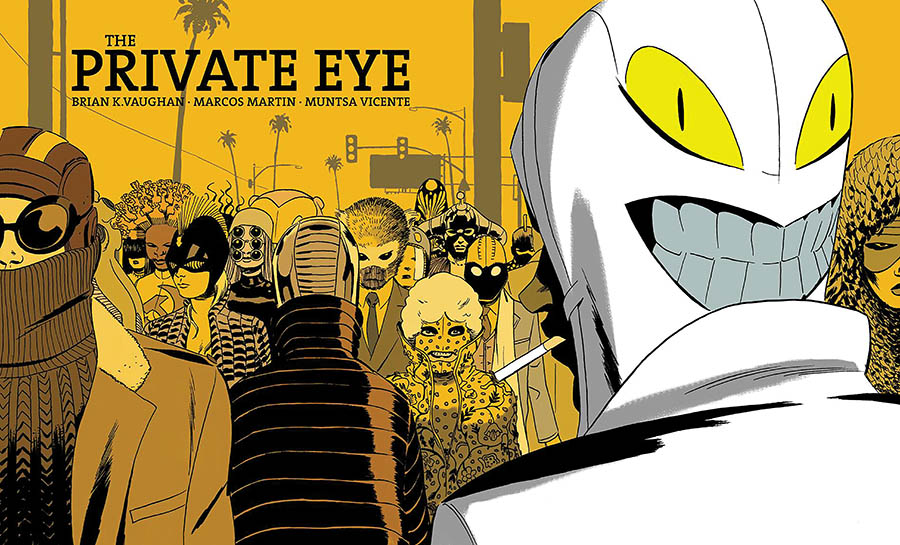 The story of Private Eye depicts an America where the press has taken over peacekeeping for the police thanks to a landmark omni-leak of every possible piece of data. The event, called “The Cloudburst,” exposed everyone’s online information to everyone else. It wasn’t the leaked account balances or private nudes that did everyone in, but the search histories. It turns out that was as close as you could come to knowing what was going on inside someone else’s head – their deepest fears and desires. A lot of those heads were pretty dark places. 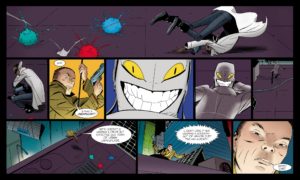 Information is power in this new world, which is why detectives have been replaced with reporters. No one wants to commit their real identity to any action – not buying bread and milk, and certainly not committing a crime, but not even going on a date. Every regular citizen tries to deprive their peers of any personal knowledge to protect the sanctity of their core identity. It’s a world full of masks and pseudonyms, where the worst thing you could do is let slip a detail from your real life while out living your best life.

If that sounds at all fascinating to you, know that I am hardly doing it justice. There are so many nuances in the world, and not just as its revealed from Vaughan’s script. Marcos Martin does career-defining work here, filling in every corner of the page with little details of life in this post-identity world. His figures remind me of Steve Ditko in their Silver Era simplicity, an impression only abetted by the bright, solid-color palette employed by Vicente.

With the sunny depiction of the world, it’s hard to decide if this is Utopia or Dystopia. The information event horizon ruined relationships and lives, but years later everyone looks bright and happy as they are free to do whatever they want in a world of mutually assured privacy without an omnipresent internet to link them together.

(Also, apropos of nothing, I take note when a book includes equal-opportunity nudity that shows as many men below the belt as women without shirts, because all people are nude sometimes. This one does.)

By the way, I haven’t really spoiled a thing yet – all of this is background information from the first one or two chapters of the book. 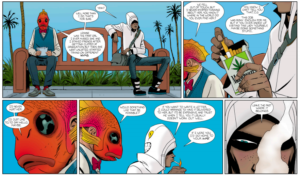 Vaughan pairs this advanced concept with the simplest of gumshoe stories – a dead dame, a vengeful associate, and a bigger conspiracy at play. With the police state shifted to the fourth estate, one thing that didn’t change so much was private investigators. They’ve always been half cop, half journo, after all. Now instead of being despised as hired snoopers, they’re thought of as paparazzi – tattling rogue reporters out to uncover dirt. Except, in this world, that dirt isn’t tabloid fodder – it’s potential control over someone’s entire life.

As Vaughan unspools more story the scope of the mystery gets bigger as do the consequences, but I found it increasingly less interesting. I went from turning pages in Chapter 2 as if I was gasping for air to idly reading a few pages at a time of an action-packed conclusion full with characters of whom I’d grown bored.

It felt as though Private Eye was building up to a bigger mystery than it could ultimately deliver. What could be more mysterious than the world Vaughan had built? Nothing could top it!

Yet, you cannot accuse Vaughan of not sticking the landing. He’s is modern comics’ most deft author when it comes to creating beloved flawed characters and wrapping up his plots in a tidy bow. Every dropped hint wound up being relevant, and each character got their due. Maybe that means it’s my fault I didn’t love this one as much as it is the creators’. I think I got so swept up in Vaughan’s world and Martin’s pictures of it that I stopped caring about the people inside.

That can happen when everyone has a mask on all the time – you fall in love more with the concept of something than who they actually are.