Dr. Seuss followed Horton with another silly rhyming tale, recycling Marco the protagonist of And to Think That I Saw It on Mulberry Street and his wild imagination. However, this time around Marco didn’t seem to capture my toddler’s imagination. 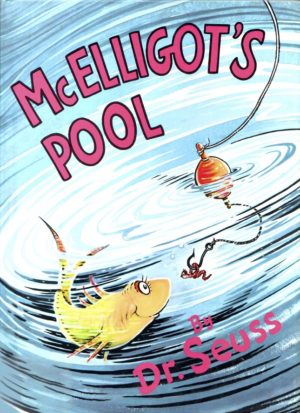 Gender Diversity: Marco and the farmer are male; some fisher are gendered as male. The one named women is out hanging her clothes (as most of Seuss’s early women are)

McElligot’s Pool reunites us with Marco, the imaginative star of Seuss’s debut And to Think That I Saw It on Mulberry Street. On this occasion he’s not walking down a busy city street, but sitting at a fishing hole out in the country. His vivid imagination is not only intact, but it has grown.

That means the same is true for Marco’s author, Dr. Seuss. His fifth book is the first to dive deeply into his fanciful world of ridiculous made up animals  – here represented in meter by all the unusual fish that Marco can possibly dream up. 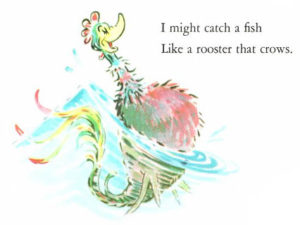 McElligot’s Pool is a really just an overgrown puddle, a hole-in-the-ground filled with water and people’s junk. A local farmer says Marco couldn’t possible catch a fish there even if he fished for fifty years! Even without the junk, I’m not sure that any fish would want to live there.

Marco is undeterred, imagining the pool as an underground river that runs out under his little town to the sea beyond. And, while there might not be any interesting fish in McElligot’s Pool, the sea is full of them! He starts out picturing real (or, at least, realistic) fish he might catch, but escalates quickly to picturing rooster fish, cow fish, downhill skiing fish and people fish. (It’s pretty gruesome to imagine catching some of them with a hook!)

All of those fish are the reason Marco keeps fishing, even if they might not really exist to be caught.

Seuss feints in the direction of an environmentalist tale with the initial focus on all the junk littering the pool, but the theme doesn’t linger after its initial mention. Once the underground river flows out to the sea, the story is like an underwater adaptation of Mulberry Street fueled by extra imagination. 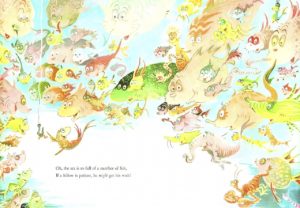 I found the book full of silly fish to be charming, but from the first read the toddler had found it to be boring. I wasn’t sure why at first. It has colorful illustrations and  zippy, easy-to-read language. After negotiating with her to read it a few more times, I think her disinterest is the result of McElligot’s Pool lacking the progression of Mulberry Street. Though the fish do get slightly bigger and more unusual as the story continues, there isn’t a clear “this replaces that” theme nor a sense of reaching a destination. It’s just a list of silly fish.

What interested toddler does have in the book are certainly the illustrations. This book features a fuller range of colors than the last few – delicate watercolors rather than the bold color fills of Mullberry or the flash of red in 500 Hats and King’s Stilts. The fish themselves are quite delightful. Seuss pushes each of Marco’s fanciful concepts as far as possible. Some of them definitely elicit a chuckle from me on re-read, especially the saw fish who can’t get around on his own because he’s poorly balanced and the skiing fish because why would a fish need to ski underwater?!

McElligot’s Pool is a silly book to borrow from a library to spur your child’s imagination, or perhaps a fun read to get them excited about a visit the aquarium, but it’s not a Seuss classic you must own.

Previous Post: « 35-for-35: 2015 – “I Need Never Get Old” by Nathaniel Rateliff and The Night Sweats
Next Post: From The Beginning: WildStorm Universe – WildStorm Rising »