You are here: Home / consume / books / From The Beginning: The Complete Dr. Seuss Bibliography

That’s true of a lot of kids, I’m sure. It’s probably the one book that has achieved the widest amount saturation amongst American toddlers since its original publication in 1957, aside from perhaps Goodnight Moon.

I’ll admit I had forgotten most things about Cat in the Hat when I first picked it up to read to EV a little over two years ago. I recalled that it rhymed, that it involved a home-invading cat, and that he brought a pair of Things with him.

I dimly remembered a few other Seussian tales – The Grinch, of course; The Butter Battle Book, which arrived in the throes of my toddlerdom; and One Fish, Two Fish, Red Fish, Blue Fish, which is very clever. The only other Dr. Seuss book we owned was Oh, The Places You’ll Go!, which was the last book the good doctor saw published in his life. It missed me entirely as a child, as it was published in 1990 – over 40 years after Cat! Actually, I only know it all all via Lindsay, who read it at a cast party in college.

Of course, at this point OCD Godzilla began to emit a mighty rumbling from deep inside my bowels. “Perhaps there is an everything Seuss box set you could acquire,” he growled from my innards. I looked, and there were quite a few – some as big as 20 books! None were close to being an “everything collection,” which would include more than 50 Dr. Seuss books.

(He also published many books under his own name, Theodor Seuss Geisel, and other pseudonyms – though he did not tend to illustrate those himself.)

Thank goodness for the library. They had every Seussian tale in their catalog save for The Seven Lady Godivas, which as you can imagine has been since censored from his catalog, and his hilariously titled first book, The Pocket Book of Boners, which really sounds like it might have more to do with a present day sports star or politician than be written by Dr. Seuss.

(“Boner,” by the way, is an early 20th century North American slang word that is a synonym to “blunder,” referring to “a clumsy or stupid mistake” – effectively, something a bonehead would do.) 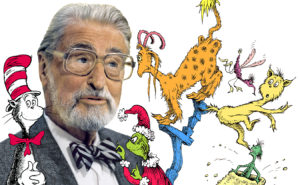 How did Dr. Seuss go from writing on the topic of Boners to inventing one of the world’s most famous cats to writing an inspirational masterpiece like Oh, The Places You’ll Go? I intend to find out in this special edition of “From the Beginning,” in which I read the good doctor’s entire oeuvre in order.

(Also, he was not an actual Doctor.)

I’ll start later today – not with Boners, but with Seuss’s first book for children, And To Think That I Saw It on Mulberry Street. Then, each week I’ll examine another Seussian tale. That’s a whole year of Seuss(!), unless you all love this feature so much that you want me to write it even more often.

Plus, Seuss has a number of post-humous works: