Have you ever burned something in effigy? 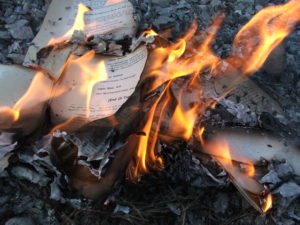 The book The House of Leaves being burned by Learning Lark

Photos of an old lover. A flag. Perhaps a Milli Vanilli record?

Burning an object is a way to symbolically exorcise bad memories, a bold form of protest, and a sure way to destroy something you are determined to repudiate.

What about a burning a book?

Book burning carries a slightly different connotation than torching your pop music records, because it can evoke the censorship and destruction of irretrievable historical records. It conjures echoes of the destruction of the Library of Alexandria and Nazi book-burning – of lost knowledge and repression. Regimes and religions alike have used book burning as a public spectacle to symbolize the purification of their subjects after being exposed to some kind of wrongful thinking.

I propose that this sort of ritual destruction exists on a spectrum of acceptability that begins at the intensely personal (photos), continues through the overtly political (flags), and finally comes to rest at objecting to thought (art, history), and the context through which we view each destructions is dictated by the relative power of the people doing the burning compared to the people being burned.

(Now I have to explain some comic book stuff for a few paragraphs, but this isn’t really a post about comic books. Seriously.) 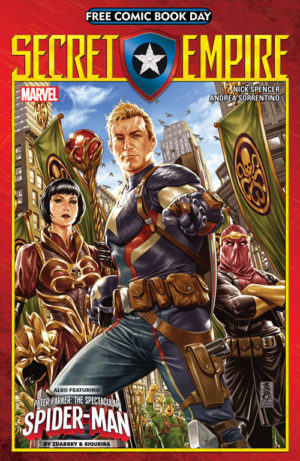 Yesterday was Free Comic Book Day (FCBD), where local comic book stores (LCS) spend money on special $0 cover price comics from every major (and many minor!) publishers that they can hand out for free to customers. It drives one of their biggest business days of the year, and fans wind up purchasing tons of store stock before they walk away flush with dozens of books.

One of this year’s FCBD issues was of Nick Spencer’s Secret Empire – that controversial event comic where Captain America is and has always been an agent of the Nazi-stand-ins Hydra as penned by Nick Spencer. (Not sure what I’m talking about? Here’s my essay and review of #0.)

Some comic book consumers decided to pick up said free single issue and then torch it, taking photos of the process to share on social media.

To say there is tension within the comic fan community over Secret Empire right now is quite the understatement. I’ve seen both sides of the argument want to paint the other as liberty-hating dummies who don’t pay attention to the comics they read. I’ve seen both conservatives and liberals both support and oppose the story – so now we have liberals calling conservatives “book-burning stuck-up Nazis” and conservatives calling liberals “attention-seeking SJW fascists.”

(Can we even pause to evoke Godwin’s Law when the actual comic book is being burned over its allusions to Nazism?)

Okay, enough about comics in the specific. Back to books in the general.

I think it’s safe to say that individual fans burning books can’t really parallel Nazi (or, in a less reactionary parallel, “puritanical”) book burning because it is a personal action by those not in power rather than a systematic purging of unacceptable view points by those in power.

Protestors at a Beatles record-burning, via Mother Jones.

Even as an action in aggregate across several dozen people, burning a book or a record doesn’t amount to a censoring action. People burned The Beatles’ records after Lennon offhandedly (and rightfully, in context) said The Beatles were “more popular than Jesus.” Yet, when people burned their Beatles records, they weren’t generally running into every store, grabbing up all the copies, and burning them in the street.

Even if they did, it’s doubtful that The Beatles music would be wiped from the public’s consciousness. This was the visible protest of a minority. It arguably detracted from The Beatles’ popularity as much as it draw attention to them.

The Beatles still had the power, within the realm of pop culture, even though they were being opposed by religion, which was more powerful in the longer term.

(This was kind of Lennon’s point, but it was also kind of the point of the burning that The Beatles were not in fact more popular than Jesus, so I think we can call this one a draw.)

As a strictly personal act, book burning falls somewhere closer to flag burning, which is a political statement by those not in power that is controversial not due to the actual flag being burned but because of the flag’s symbolic representation of that power.

Of course, most books short of religious texts don’t have the symbolic power of the flag (or, say, a picture of the pope torn up by Sinead O’Connor on SNL). To try to tell an individual who elects to burn a book that they’re emulating a Nazi is misguided at best and completely tone-deaf at worst (and both bring us back to Holocaust etiquette, as described in my Secret Empire #0 essay).

One thing most of these burnings have in common no matter the power differential of the burner versus the burnee is that they took some expenditure of effort. Existing libraries, purchased Beatles records, and O’Connor’s use of an elevated public platform to make a political statement. 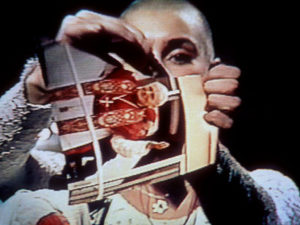 Sinead O’Connor tearing up a photo of the pope on Saturday Night Live.

When you burn someone or something in effigy, you tend to put in a lot of effort acquiring or creating the effigy. The effort is part of the effigy. When you burn an old lover’s photo, part of what you are burning is your love.

Fans burning a FCBD issue are like fans burning a free flag handed out to them at a parade. They’re taking aim at the symbol, but the thing they’re really burning is the kindness of the people who handed them something for free.

With Secret Empire, fans are really burning the local comic book stores’ hard-earned capital – so, hopefully they bought some stuff while they were in the shop! Otherwise, their protest was mostly just rude.

Look, I get it – when you want to protest a thing you don’t generally want to contribute to its maker’s bottom line by paying for it. Buying a flag is harmless, since there’s no hegemonic FLAG CORP that’s profiting off of each purchase, but when you buy a comic, book, or record, you’re lining the pocket of the person you’re protesting.

Yet, to that I say: nothing ventured, nothing gained.

So, who are  his free comic book burners? Are they too cowardly (or too unaware of history) to burn their existing Nick Spencer, Captain America, or Marvel books – instead effectively stealing a FCBD book from a fan who would enjoy it?

Or, are they making a statement that Marvel should not be flooding a day very much geared towards all collectors – avid and new, young and old – with a piece of what they view as Nazi-sympathizing (or, at least, irresponsibly-told) propaganda in the modern day? And, to send a message Nazi-tinged with irony, they are burning it in protest!

There’s no right answer – and, indeed, it’s why we have protected speech in America! Each person could be making their own statement by lighting the issue on fire. And, while I won’t be burning any of my existing tens of thousands of Marvel Comics or a free one I’ve just picked up, I’m very happy to watch them burn.