A few hours ago DC Comics dropped the biggest bombshell comics industry news we’ve heard in years. Forget special events or character deaths – this is truly a “nothing will ever be the same” kind of event.

It’s hard to imagine industry news bigger than that, aside from perhaps Jim Lee abandoning DC to head back to Marvel! Anything less couldn’t possibly compare. That’s because Bendis’s hand in steering the development of Marvel’s comic universe over the course of the past 17 years cannot possibly be overstated. 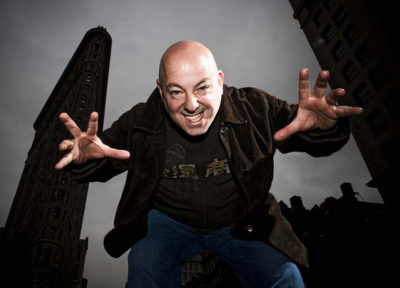 Brian Bendis completely rebuilt the Avengers franchise into a multi-title behemoth over the course of seven years, defining Marvel’s Universe along the way in a series of major events that fundamentally altered the company’s status quo.

He has solely written the Ultimate version of Spider-Men since 2001, including creating Miles Morales and bringing him to the main Marvel Universe.

He created Jessica Jones and set Daredevil on a course that had seen continued critical success through present day. He took previously forgotten characters like Luke Cage, Iron Fist, and Spider-Woman and brought them back to prominence for other writer’s to develop.

That assessment doesn’t even mention his Guardians of the Galaxy, X-Men, Iron Man, or any number of other major titles.

Brian Bendis has  just written a lot of comic book issues and stories. Even as a non-fan of most of Bendis’s output, I cannot possible deny his impact.

While it will be a little while before we learn who will be the new driving force behind Marvel’s creative direction, the more imminent question is: who will replace Bendis writing four titles a month!? We’re heading into Marvel Legacy with him writing Spider-Man, Iron Man, Jessica Jones, and The Defenders.

Plus, we have to make sure to leave at least two writers with room to steer The Avengers franchise, which will be up for a shake-up in April. Plus, we need to staff the impending returns of Wolverine and the Fantastic Four (both heavily speculated as potential Bendis territory). And, finally, we ought to spare at least one writer for a marquee X-book.

Let’s take a moment to dissect Marvel’s current roster of writers in Marvel Legacy and figure out how to reassign those books.

Who Are Marvel’s Current Architects?

Back in 2010 Marvel explicitly named five of their biggest multi-title writers as the brand’s “architects” – Bendis, Jason Aaron, Ed Brubaker, Matt Fraction, and Jonathan Hickman. In the Marvel Now period that followed, Brubaker departed and was more or less replaced with Rick Remender (and, to a lesser extent, Kieron Gillen).

Here are the obvious answers:

Jason Aaron. Aaron seems to be headed towards the end of his run on Thor and isn’t writing any other books so far in Marvel Legacy, plus his run on Star Wars is over. Is Marvel about to lose another heavy-hitter? I say no, since he wrote the massive new universe-wide plot threads in Marvel Legacy #1. Clearly he’s going to be adding another one or two major title to his line-up soon.

Gerry Dugan. Dugan graduated from writing Deadpool while pitching in on smaller books in Marvel Now to anchoring Uncanny Avengers in All-New, All-Different Marvel. He recently jumped ship from Avengers to Guardians of the Galaxy, and he’s still writing Deadpool. Guardians is a big franchise to steer – he might be set for now.

Al Ewing seems to have finally graduated to star status after reliably pumping out 1-2 great titles every month for Marvel for a few years now. He’s currently on Ultimates, Royals, plus his share of Avengers “No Surrender” in Legacy. It’s not hard to imagine he’s going to wrap up Ultimates and then be on a big upcoming Avengers relaunch this spring. Also, he’s also pretty much already written Defenders in Mighty Avengers.

Nick Spencer: Spencer’s ongoing role at Marvel is a bit of a mystery right now. He’s coming off writing a pair of Captain America titles plus the universe-shaking Secret Empire. But he’s also contributed excellent lighter tales like Superior Foes and Ant-Man. Unless he’s totally burnt out, it’s hard to imagine he’s going to disappear from the lineup – he’s got to have at least one title coming up aside from the one-off Not Brand Ecch.

Charles Soule: Soule writes a lot of creator-owned work, but his for-hire work seems to have settled down to be exclusively Marvel. He’s currently writing Daredevil (twice a month!), Astonishing X-Men, plus Poe Dameron and Darth Vader. Whoa! However, Astonishing will be winding down by the time Bendis makes his exit and it’s not crazy to think he might only have another 10-12 issues of Daredevil in him, so we could see Soule on some new books in 2018.

Mark Waid: Waid is a classic comics writer and the most-experienced writer on multiple books at Marvel right now, writing Avengers, Champions, and Captain America. He can easily handle 3-5 issues a month. If he sticks around on Avengers after the new “No Surrender” arc, he probably doesn’t have room to write other titles.

Any pick-ups or trades to be found here?

Who are Marvel’s hottest multi-title writers?

In every period of Marvel’s recent history they’ve focused on developing an undercard of talented writers working across multiple titles who drive the line around the work of architects. This is how they’ve readied writers like Remender and Duggan to be called up from the ranks for bigger assignments.

Cullen Bunn is currently writing one of the two X-Men flagships plus Monsters Unleashed. The latter title could get cancelled, but I don’t see Marvel putting him on a major flagship launch outside of X-Men at this point (though I’d be happy to be wrong).

Donny Cates has been in the industry for a while, but he’s suddenly hot off of a number of strong indie titles (his Baby Teeth is marvelously wicked). Marvel just wrapped him up in an exclusive contract, and he’s writing Doctor Strange and Thanos. Probably not due for another book anytime soon.

Ta-Nehisi Coates has ably juggled writing Black Panther with co-authoring at least one other title at a time, and is now tipped to be writing an upcoming Storm ongoing. That’s probably a full slate for him, but It’s really tempting to think of him for Miles’ Spider-Man – not because he’s black, but because of the relevant focus on social injustice in his non-fiction work.

Dennis Hopeless has seemed poised for a big break at Marvel for a while now, but he keeps swinging back out to writing supporting titles. He’s currently only writing Jean Grey – but we’ve seem him handle multiple books at once in the past. Marvel seems to have deemed him “good at writing women” (or, at least, he keeps pitching female-led titles).

Greg Pak is currently writing Amadeus Cho as Hulk as well as Weapon X. He could make sense on a new Wolverine book if Weapon X wraps up with Logan’s return.

Dan Slott has been nearly a decade-long mainstay of Amazing Spider-Man, but he also just wrapped over two dozen issues of the critical darling Silver Surfer. He’d be perfect on Fantastic Four, but that’s two massive (Fox-owned) plates to keep spinning at once. Maybe he’s ready to return to another fringe book with a lot of heart, instead?

David Walker has been consistent for two years now on titles like Nighthawk, Power Man & Iron Fist, and Luke Cage. It would make sense for him to absorb Defenders based on his strength on the characters so far (although I’d also dig him on Miles as Spider-Man).

Chip Zdarsky. Zdarsky went from writing the one-off humor title of Howard The Duck to penning both a supporting Spectacular Spider-Man title and Marvel-Two-in-One to (presumably) lead into the return of Fantastic Four. Is he going to step away from the chuckles to write the Four full-time, in addition to his ongoing illustrating gig on Sex Criminals and other licensed work.

Jim Zub. It looks like Marvel is finally leaning into Zub in a way it used to use Kieron Gillen – picking up threads from other writers. He relaunched Thunderbolts out of Spencer’s “Standoff” story and now he’s backfilling Duggan’s spot on Avengers. He’s probably going to turn up somewhere in the Avengers books after “No Surrender,” but more than anyone else on the list he feels like a wild card.

Any pick-ups or trades to be found here?

Who is ready for a big promotion?

Marvel has a few writers who have been mostly penning just one title at a time but doing it with extraordinary talent – and all of their books could be wrapping up soon. Where will they head next? Right into our game of musical chairs!

Mike Costa been bouncing around on Spider-Man supporting books for a while now and is currently penning Venom to decent critical and sales reception. It seems like it’s time to get him on a second title before he gets sucked up into more licensed work for IDW.

Matthew Rosenberg has been writing a lot of short-lived Marvel titles – they seem to be biding their time to get him on the right big ongoing. With him on the un-hot Secret Warriors (a cast that includes Inhumans and mutants) and penning the return of adult Jean Grey, it seems he’s destined for an X-Book.

Tom Taylor is amazing on All-New Wolverine, delivering the goods month in and month out. He previously wrote Iron Man, but he seems better on the more youthful and cheerful title. Considering he’s been a bomb blast for DC with his work in the Injustice universe. Marvel needs to get him on an exclusive if he isn’t already.

Kelly Thompson has been utterly perfect at Marvel so, but she’s only been on one book a month … up until January, with the launch of the Rogue & Gambit limited series. Is it a coincidence that it wraps up just as this big set of musical chairs gets underway? I don’t think so. I think her Hawkeye run is ready to wrap up in the next arc or two and they could be moving her to the big leagues – perhaps with Jessica Jones in time for the second season of the television show.

Robbie Thompson has been terrific on everything he’s touched and he’s currently only on Spider-Man/Deadpool.

Where do we stand now?

Who are Marvel’s “emerging” and “boutique” writers?

After you wrap up that list you have the underbill of Marvel’s “emerging” writers who have only written a single title and their “boutique” writers who usually only touch one specific book at a time (largely because they have commitment elsewhere).

We’ll probably see some of the emerging crew hop onto smaller ongoings, but the “boutique” folks are probably not going anywhere any time soon.

I’d put Jody Houser somewhere between these two lists. She’s now written a ton of books for DC, Marvel, and Valiant. They all have to be circling her for ongoings at this point, but with her just joining Supergirl for DC she’s not going to go exclusive for Marvel.

Similarly, Saladin Ahmed was an unqualified smash hit on Black Bolt, so if he’s got time to be more than “boutique” I’d say he’s already graduated from “emerging.”

Also, where the heck is Christos Gage lately? While his titles sadly never break out to be big hits, he’s consistently great.

And, finally – could Marvel tempt Kieron Gillen from just writing Star Wars into getting back onto a superhero ongoing? With the smash hit of Darth Vader behind him and the continued success of The Wicked + The Divine he’s solidified himself as one of the best-selling authors in comics. Surely they must ask him if he’s interesting in pitching anything from time to team.