Sometimes the biggest culture shocks come from the subtlest parts of our daily routines.

Case and point: the giant sucking sound produced by seemingly every bathtub in New Zealand.

No matter where you live, you probably take for granted that your bathroom habits translate more or less universally around the globe. Everyone has toilets and showers, right?

Well, yes, but they don’t all have exactly the same form and function as what you’re used to. I haven’t lucked into any bidets or squat-toilets in my admittedly minor international travels, but they’re out there. More common is that showers outside the US often come standard with a detachable head on a long hose rather than a fixed one, so that you can spray your most hard to reach spots.

What I did not expect is for baths to be different here. 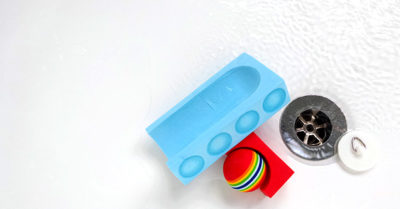 Personally, I have not taken a bath since the 1980s. I find the concept of sitting in a puddle of my own lukewarm filth to be pretty disturbing. Heck, even swimming pools are a little bit creepy if you stop to think about it, and they have the benefit of chlorine.

Yet, when you have a small child, bathtime becomes a regular fixture of your daily routine (which is a bit ironic to me, as after a typical day of life kids generally have way more filth to rinse off of their bodies than a grown-up). Even when your little one starts to become enamored with showers, you will continue to appreciate the convenience of just tossing them into a bath and let the water passively soak off their grime while they play with floating toys.

“WHAT IS THAT?” I asked E, covering EV6’s ears with my hands as she (totally understandable) freaked out about the squelching.

“THE DRAIN?” she replied?

We both peered into the drain, thinking perhaps it was clogged in some way. It looked like a normal, unclogged drain. The water was going down in a typical fashion. It was just making a terrifying sort of slo-motion Nazgûl sound while it was happening. Like, maybe Peter Jackson just sampled a Wellington tub while it drained to create the Nazgûl’s in Lord of the Rings and then speed it up slightly for their high-pitched wailing.

I didn’t think too much of the noise. After all, it would only be our problem for a few weeks. We simply got in the habit of one of us scooping EV6 out of the tub and transporting her to her own room, closing several doors behind us in the process, while the other unplugged the drain.

Thus, the giant sucking sound was not on the top of my mind our first night in our house, when I gave EV6 a bath. Right up until I unthinkingly pulled out the plug and that very same squelching began a new, much to EV6’s terror.

I spent the next few nights poking my finger and other blunt objects into the drain to see if I could interrupt whatever hellish centripital force that was summoning the sound. E decided to take a more anthropological approach to the problem. She polled her co-workers: who among them had impossibly loud bathtub drains?

The majority of her subjects volunteered that they, too, had Centripital Sucking Nazguls in their bathrooms. Not just brand new renters like us. Long term residents who just kind of shrugged as if to say, “Yeah, they all do that.”

This story is more about incorporating a careful strategy of closed-door tub draining into EV6’s nightly bedtime routine. It’s about peculiar little cultural differences in our expectations.

I’d imagine many travelers to the states marvel at our many undetachable shower heads. It only takes a little more effort to make the thing detachable. Honestly, I agree with them.

Similarly, if a drain made this noise for one second in America, you would do something about it. As a renter, it would merit a call the next morning to your landlord. I cannot conceive that anyone I know would tolerate it in the long term, especially if they were using the bathtub on a daily basis. You’d swap out the drain fixture, check the fitting, move the U-pipe or something… I don’t know, we’re coming to the end of my plumbing knowledge already. I just know that you would do everything in your power to do something about it!

In New Zealand – which, I will point out, is a country of incredibly handy people – this noise is so common that it merely produces shrugs. It’s not a problem worth innovation or solving. It’s just a minor, bearable annoyance.

I’m not sure which will take longer to get used to – the noise or the shrugs.