You are here: Home / consume / comic books / Updated: The Definitive Guide to Elektra 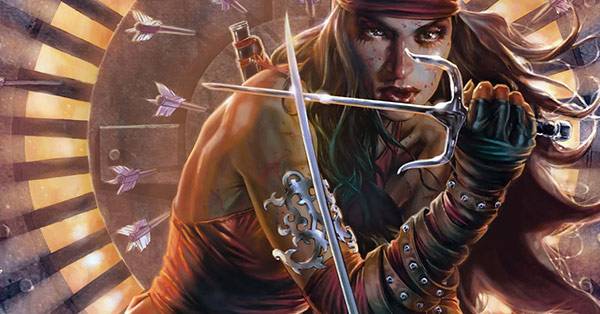 If you’ve watched Marvel’s Daredevil on Netflix, it is surprisingly faithful to Elektra’s comic origins in the pages of Daredevil. 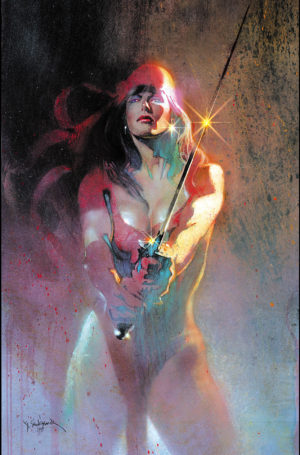 Yes, she was an assassin for hire who made things at once difficult and sexy for Daredevil. Yes, she was also retconned as Matt Murdock’s further girlfriend. She was even killed on a roof with one of her own sais – though, in the comics, it was an an epic showdown with Bullseye. In fact, she’s even resurrected by The Hand in the comics!

Basically, the TV show has covered all of the ground of Frank Miller’s original run with the character. He also inserted some pre-history – one, Elektra Assassin, sees Elektra face off against SHIELD before her Daredevil run.

Elektra had a sort of mythic quality for comic readers after her death. She had all of the doomed romance of Gwen Stacy or Jean Grey, but also with the reputation as one of Marvel’s most ruthless killers. When she returned in the mid-90s to anchor her own ongoing series in 1996 she was immediately recast from a villain to a permanent anti-hero (though still an assassin).

Here’s the interesting thing about Elektra – even as late as the release of her feature film in 2005 she was still a myth to the rest of the Marvel Universe aside from her interactions with Daredevil and Wolverine! She hadn’t appeared in any events or crossovers, and had shared just a pair of issues with Spider-Man.

That changed at the hands of Brian Bendis, who made Elektra the unwitting star of Secret Invasion in 2008, not only exposing her directly to the entire case of the universe, but having her run-in with characters like X-Force, Black Widow, and Misty Knight. Then, in 2012, Elektra made her most sustained run of appearances to date when she was a member of a reformed Thunderbolts (along with Deadpool, Punisher, Venom, and more!).

Where to Start Reading Elektra

Elektra has so often been a player in the sagas of other characters (and, so often been written out-of-character) that there are relatively limited places to leap into reading her without getting tangled up in other stories..

After that, I wouldn’t recommend the start of either of her first two solo series. However, the final volume of her 2001 series Elektra ol. 4: Frenzy by Robert Rodi, contains the first truly good solo stories she’s had.

However, my true #1 recommendation would be to jump right to the modern era with Elektra (2014) Vol. 1: Organ Donors. This is a run I love, with really stunning interior illustrations by Mike Del Mundo. It’s Elektra done right, with the scope and strength her character deserves. 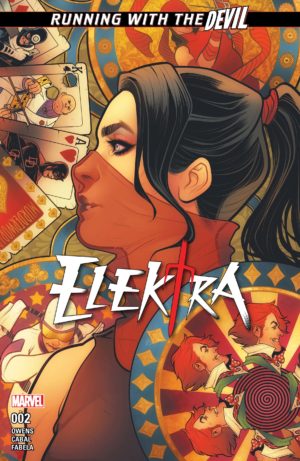 2017 has been kind to Elektra readers – there’s plenty of new fodder to read.

The biggest news is the first-time collection of her complete1996 series as Elektra By Peter Milligan, Larry Hama, & Mike Deodato Jr.: The Complete Collection. It’s not totally riveting comics, but it is a handy all-in-one collection.

Slightly before those stories, Elektra also made a number of strong guest appearances in late 2016 or early 2017, including a pair of three-issue arcs in Uncanny X-Avengers Unity Vol. 3: Civil War II  and Spider-Man 2099 Vol. 6: Apocalypse Soon

Elektra was briefly in the hands of the outstanding author Zeb Wells with Dark Reign: Elektra, which followed her in the immediate aftermath of Secret Invasion. It wouldn’t be my first recommended reading because it ties so strongly into other stories, but it’s one of my favorites.

With a relatively limited portfolio of solo titles – the second longest of which was just collected in full – Elektra must be getting close to being 100% collected … right?

* Editor’s Note: A few weeks after this post, Marvel announced a Daredevil Epic Collection that will collect Root of Evil. The chart has been updated to reflect that collection. There are now only four issues of uncollected Elektra!

We’re really close to having every Elektra-starring series collected.

Her 1995 prestige format pseudo-origin series remains uncollected, and it might stay that way – there’s not a lot of strong hooks to hang a collected edition on, unless you call it “Elektra Origins” and include her appearances in Man Without Fear as well.

Her 1996 Complete Series collection made the boneheaded omission of not including her 1998 split annual with Spider-Man, which leaves that issue stranded.

Finally, as with a lot of early 2000’s Marvel Knights and non-Bendis Daredevil, her mini-series with Echo has not been collected. If Marvel ever covers the brief pre-Bendis Daredevil gap, I could see this getting captured there.

That said – none of those minor gaps are essential reading for Elektra. There’s nothing keeping you from enjoying this character from her beginnings through present day either in print or on Marvel Unlimited. Want to make sure you don’t miss a single significant appearance? The Guide to Elektra covers every issue she’s ever appeared in, including notes on if each one was a definitive story or just a cameo.