You are here: Home / consume / comic books / New For Patrons: The Definitive Guide to Marvel’s The Sentry

What started as a quickie guide to a character with just 26 issues to their name turned into a massive research project, which yielded a brand new guide for Patrons of Crushing Krisis…

The Sentry – The Definitive Reading Order and Collecting Guide 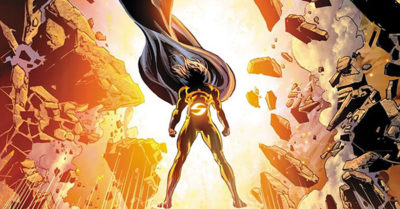 This guide covers every Sentry appearance, from his debut in 2000 through his return in Marvel Legacy.

Not only does it cover every appearance, it also summarizes all of his guest appearances, so you can know if they are critical or just a cameo.

I gained a whole new appreciation for Sentry from working on this page. I’m not usually a big fan of major retcons, and that includes retconned characters. However, Paul Jenkins created a perfectly flawed Marvel Superman in his retroactive insertion of The Sentry into Marvel’s Silver Age – and he came with the perfect excuse for why we’ve all forgotten them.

Then, Brian Bendis made Sentry’s flaws one of the major themes of his run on Avengers. Those flaws aren’t just of a single character, but representative of how the moral purity of Silver Age heroes decays in the modern age. In his inflexible pursuit of rightness, Bendis’s Sentry sides with registration in Civil War, joins Norman Osborn’s Dark Avengers, and eventually implodes into his darkness.

In a way, I feel like I wasted my initial read of Bendis’s Avengers because I wasn’t already familiar with The Sentry when I started!

It’s not a coincidence that a Sentry guide helps me to plug a hole in the new Marvel Fresh Start era page. If you want to predict my next few Marvel guides, it’s as easy as thinking about the gaps of my coverage of ongoing series in Fresh Start, Legacy, All-New All-Different, and Marvel Now.