Sometimes it takes a long time for a plan to come to fruition.

Case and point: tonight’s new guide for Patrons of Crushing Krisis, which is less of a guide than a directory page … and which has been in the works for well over a year (even though it’s a guide for something that has just been announced)! 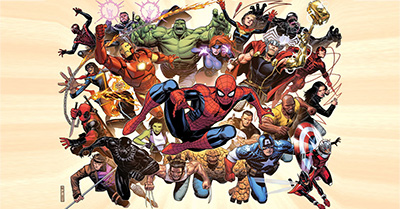 This Marvel Fresh Start page covers every series announced so far for Fresh Start, including ongoing series that are continuing into the era. For each series, it lists the launching creative team, explains where it is continuing from, and links to the guide that contains the full reading order details.

The plan for this page began in December of 2016. At that time, I was working on the massive DC New 52 and DC Rebirth guides to debut for Patreons early in this campaign.

It made so much sense to see an entire era of comic books summarized in one page … so why hadn’t I done that for Marvel!?

The answer to the question has to do with the transgressive nature of those two guides. I have a “double jeopardy” house rule on CK where I try my utmost to avoid detailing how to collect issues of a certain series in more than one place. If I do, that means I’ll have to update more than one place as new collections come out over the years – doubling my work load.

However, when I launched the DC section of the site, there were literally no other DC Guides, so I had no choice but to detail the full collection information of every series on the New 52 and Rebirth pages.

I was definitely not going to take that approach for Marvel – it would be the death of me! However, the alternative was for a Marvel Era page to link to the corresponding guide page for every series in the era. I’ve got pretty strong coverage of Marvel’s bibliography, but not quite that strong!

Thus, began my journey to catch up my comic guides with the present day of Marvel. That involved not only several new guides, but breaking up existing guides that covered multiple characters and changing section structures so I could link into each one at a consistent spot for each era.

It also meant catching up on reading Marvel, so I could explain the continuity of the post-Secret Wars Marvel Universe. I’ve read over 1400 issues of Marvel comics in the last 16 months!

This era guide is just the first in a series – I’m already putting the finishing touches on Marvel Legacy, plus working on launching new character guides to support era pages for All-New All-Different, Marvel Now, Heroic Age, and more.

Eventually, Crushing Comics will cover every Marvel series and issue from the beginning of the Silver Age through the present day!

Want access to this guide today? This is guide is available to all Patrons of Crushing Krisis, regardless of their level of support. Join the campaign by pledging as little as $1 a month to support a site that can help you fall in love with and follow thousands of your favorite comic books.